Manchester City’s Italian wild-child Mario Balotelli is no stranger to getting booed whilst on the pitch, but this latest vocal barrage from fans is the result of one of one of the most ridiculous pieces of showboating ever seen on a pitch

The former Inter Milan man was blasted by fans from both sides of the Atlantic as a piece of show-boating went disastrously wrong for the powerful striker as the LA Galaxy hosted Manchester City – who were debuting their new Home Shirts for the 2011-12 Season.

Fresh from scoring the opening goal of the game from the penalty spot, Balotelli was played through on goal after a beautifully-weighted pass from David Silva. With only the keeper to beat, the fiery Italian opted to perform a tame backheel. Which, rather than hitting the target, scurried harmlessly past the post. 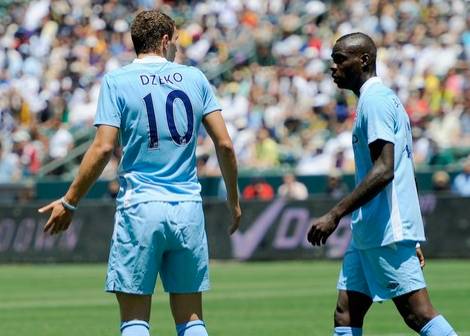 After some presumably ‘choice’ words from desperate-to-prove-himself strike partner Edin Dzeko, Balotelli was instantly substituted by City supremo Roberto Mancini for James Milner – to a chorus of jeers from the whole stadium.

After an exchange of words with Mancini (which Roberto says ‘would be difficult to translate to English’) the temperamental forward disappeared down the tunnel for the rest of the game.

It would be Balotelli’s loss, though, as the Galaxy fought back via a scorching Mike Macgee strike to provide an entertaining 90 minutes and take the game to penalties. The resulting shoot-out was won by the Blues 6-7, with Joe Hart not only proving to be England’s best ‘Number 1’, but also one of it’s best penalty takers after hammering home the winning PK off his newly-switched Umbro Geometra Pros.

Despite having now featured in a small selection of Nike adverts, Balotelli is yet to switch out of his White/Black/Cyber CTR360 I’s – though he has added a mixed-sole hybrid plate to his beloved football boots. 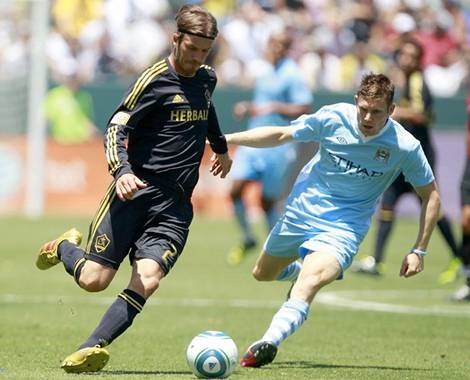 One player who did switch his cleats, though, was a certain David Beckham. After playing his last two LA Galaxy games in a one-off pair of White/Pink adiPower Predators, the former England captain was back in his synthetic DB Gold adiPower' football boots – which were a great match for the Galaxy’s new third shirt.

What do you think of Mario Balotelli’s antics?

Does he have the discipline required to be a modern professional?

Is there a manager that can tame his seemingly bonkers behaviour?

Written By
Felipe
More from Felipe
The Two Global Sportswear Giants Fight for the Right to Sponsor Brazil...
Read More