Just when you think there’s nothing more to come from any of the big football brands – adidas show they have one last trick up their sleeve.

Adidas are on the brink of releasing their final ad for the World Cup – The Quest.

The Quest has been described as the culmination of the last year of the ‘Every Team Needs’ series.

The ‘Every Team Needs’ series has been a favourite here around Footy-Boots, starting last year with Lionel Messi as ‘The Spark’ in the adidas f50i, and coming full circle with the penultimate ad – ‘Fast vs. Fast’ starring David ‘the Blaze’ Villa alongside Messi’s Spark advertising the adidas f50 adiZero.

Along the way, the series has promoted adidas’ latest generation of football boots, including the Predator_X with Beckham and the adiPure III with Kaka 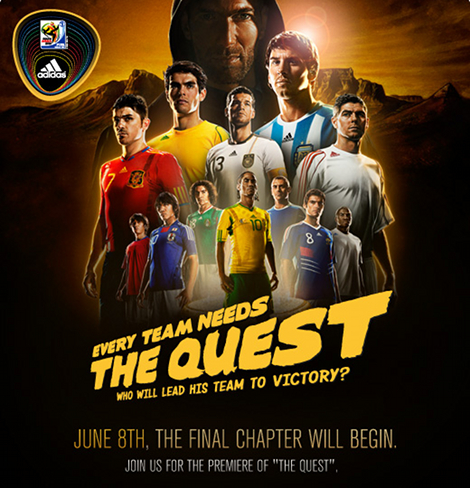 The ad features all the stars you’ve seen in adidas’ ads – and more!

There’s a player from each of the 32 teams involved in the FIFA World Cup this summer, and adidas wants to know : Who will lead his team to victory?

Cryptically, the ad also says: “You Decide” – so we’re guessing that along with the ad, adidas will also be releasing some sort of interactive element to ‘The Quest’ over at their Facebook page.

What do you think it will be?

What’s your opinion on the ad – how does it stack up to the Nike Write the Future ad? Or Puma’s Love = Football campaign?

Written By
Kyle Elliot
More from Kyle Elliot
Leo Messi gets in on the fun of the #ThereWillBeHaters campaign with...
Read More