If you’re looking to make a splash in the European market, signing a member of the Barcelona starting XI isn’t a bad way to go about it – and that’s exactly what Brazilian brand Penalty have done with their new deal with Victor Valdes. 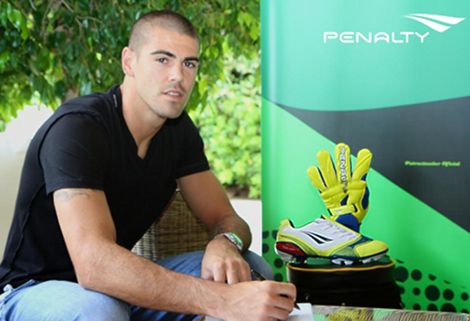 With 5 La Ligas, one European Super Cup, 3 CLs and FIFA World Club and national honours with Spain under his belt, Victor Valdes is one of the most celebrated goalkeepers ever to have played the game, and now Brazilian brand Penalty are hoping to harness that star power as they add Valdes to their roster of players.

In a 5 year deal with Penalty, Valdes will be wearing football boots and gloves from Penalty's S11 line – the flagship range from the South American brand.

Ĺ›I'm happy and pleased to sign this deal with Penalty, a Brazilian brand which is now seaking international projectionĹĄ said Vald's.

Valdes began wearing his new Penalty gloves last month, after wearing a white prototype pair over the summer, and Penalty will be presenting the Spainish international with his very own pair of Penalty S11 football boots very shortly. 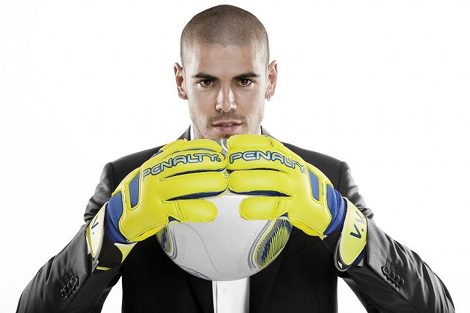 We at Footy-Boots.com would like to send a sincere thanks to Penalty for finally hooking up Valdes with a deal, as one of the most common questions we get asked is ‘What football boots does Victor Valdes wear?”

Well, after years of the World Cup winner cycling between Nike, adidas and Mizuno, we’ll finally have an definite answer!

The Penalty S11 football boots use Penalty's exclusive technology named Molix (more to that in future articles) which enhance control and flexibility providing more precision in passes and shots.

The top level S11 is made with synthetic leather and TPU for extreme comfort and optimum weight, and the insole is designed to improve ventilation and comfort.

We’ll have more on Penalty’s S11 range to follow soon, when Valdes gives them their official European debut, but that’s all the information you get for now!

Victor Vald's Arribas is one of the most influential players in the game at present; with 400 games as the number 1 goalkeeper for Barcelona and four Zamora trophies (the accolade given to the goalkeeper who conceded the least goals in La Liga) Valdes is a without a doubt an idol for young goalkeepers around the globe, which makes Penalty move very wise to say the least.

What do you think to the deal?