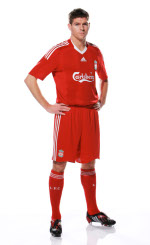 Liverpool midfielder Steven Gerrard has revealed his frustration at being ‘shunted around’ and is desperate to nail down his preferred central midfield role for both club and country.

The England international’s superb versatility means he rarely plays in the centre of midfield, usually being used on the left or right and he believes that is having a detrimental effect on his development.

Gerrard, who says he has played in his favoured central position five times in 68 games for England, even had a frank discussion with Liverpool boss Rafa Benitez before the start of the season to spell out his desire to play in a central role.

Gerrard told The Times: “I told him (Benitez) that the way I like to play, you get the most out of me when I’m box-to-box, defending at one end, throwing in tackles, then getting my passing game going and getting to the edge of the box for shots. I find it difficult to play how I want to in the other positions. “I love it when a manager says to me, ‘You’re playing in the middle, I want you to go and run this game’.

“I’ve paid the price for being able to do a decent job in other positions. Other players don’t get shunted around because they can’t do it. I can’t go and play on the right or the left and become Kaka or Robinho, I just go out there, give 100% and do a steady job. I’ll work hard, do my bit defensively and help the team. That’s why managers do it to me, but it is affecting me. My game suffers when my position is changed.

“I’m a central midfielder and in the big games I want to play in the middle and show that I’m one of the very best in that position.”

Gerrard is currently sidelined after undergoing groin surgery although Benitez is hoping Gerrard will be fit to face Manchester United next weekend. Gerrard, whose Liverpool side are soccer odds of 2.96 to defeat the champions, is however more cautious and is hoping to return against Marseille in the Champions League on September 16th.