Robin van Persie is our kind of player. Not only is he hard-working, a lethal finisher and great in the air (like all Footy-Boots.com staff members. Kind of.), but he’s also got a keen interest in his football boots.

In fact, the Dutch forward’s infatuation with his footwear is something we’ve spent some serious column inches covering in the past.

Now, anyone that’s followed RvP’s career over the past 18 months knows that the Manchester United Striker has been nigh-on impossible to shift from his Slime adiPower Predators; after the Netherlands crashed out of Euro 2012 whilst Van Perise was wearing the new Predator LZ’s, the striker has consistently turned out in his trusty adiPowers over offers of anything newer from adidas’ stable.

Undoubtedly frustrating for the Three Stripes, there must have been a small sense of victory for the staff at adidas when the Red Devils’ No. 20 kicked off the season at Wembley for the Community Shield wearing the Infrared F50 adiZero – and even bagged a brace wearing them.

For Manchester United followers, this spot will have been a little less surprising, given the Dutchman has spent most of the pre-season breaking in his new cleats.

However, the greater stage that Wembley provides allowed us a great up-close look at Robin’s new F50s.

Obviously not willing to part with all the features of the adiPower just yet, van Persie does use a customised F50 equipped with an adiPower plate – evident thanks to it’s more traditionally-bladed stud shape. 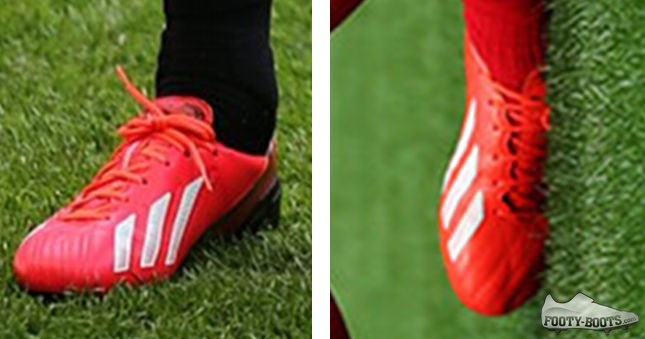 We’ve also noted the former Arsenal man seems to have some bespoke stitching on the upper of his boot, if not a bespoke upper entirely.

Compared to the ‘usual’ leather adiZero (modelled on the right by Luis Suarez) with criss-cross stitching on the toe-box, RvP’s seems to be more heavily stitched into ‘capsules’, a little like the adiPure IV.

That said, it’s nothing like anything we’ve seen on any adidas boots to date, and we wouldn’t expect the Three Stripes to go for something so complex on the next incarnation of their sleek speed boots – so we can rule out the Dutch international getting a sneaky disguised pair to ‘break in’ ahead of the next F50 release.

Either way, the flying forward will be hoping to push on into the new season, and is off to a great start in his new footwear – but will that be enough to convince Van Persie to ditch the adiPower for good?

We’ll just have to wait and find out!