Manchester United fans will be heartened today after Luis Antonio Valencia returned to training with the Manchester United first team this past week – and it looks like the Ecuadorian international is picking up right where he left off in terms of football boots.

The former Wigan Athletic winger was injured in a Champions League clash with Rangers back in September, after a challenge left him with a broken and dislocated ankle – but after over 5 months on the treatment table Valencia is back on the training pitch for the Reds.

Preceding his horrific injury, Valencia was one of several players to be playing in a custom version of adidas’ Predator X which incorporated elements of the soleplate from the older Predator PowerSwerve.

Players like Xavi, Beckham and Valencia’s team-mate Dimitar Berbatov are among the top-level players who prefer the PowerPulse system and 8 stud SG soleplate over the new PowerSpine sole with 6 SG studs – and it looks like Valencia is set to continue, rather than wearing the standard Predator_X football boots.

It’s interesting that the Ecuador international has gone back to his older football boots – we’ve seen cases before where players have switched boots coming back from an injury, not wishing to play in the same cleats they were injured in. 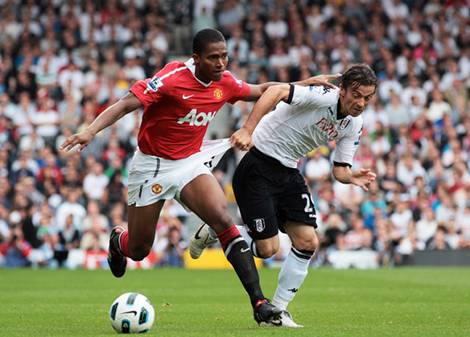 However, this doesn’t look to be the case for Valencia who, looking at the colourway, has definitely gone for an old pair of Predator X‘s maybe even the pair he wore in his last game for United.

Sir Alex Ferguson will be pleased to have Valencia back among contention for the Manchester United XI, as the return of another out-and-out winger will allow the Reds to balance Nani’s attacking prowess with more width, rather than playing narrow with central midfielders like Carrick, Fletcher, Scholes and Gibson.

Finally, we’re glad to see Valencia back in training and hope to see him on the pitch again soon!