Looking back on the 2010 FIFA World Cup, many fans will remember this year’s tournament as the year that ‘geeky’ side of football equipment came to the fore.

After it’s big reveal in January, there weren’t many pundits who could even say ‘Jabulani‘ let alone tell you about the aerodynamics of the official adidas matchball.

But sure enough, by the 3rd week in June, everyone from TV Pundits, Ex-Pro’s and legendary football boot developers were able to tell you that it ‘bobbled’, was ‘too light’ and even (thanks to NASA, that’s right THE NASA) could explain that the drag along the surface of the Jabulani meant that it dipped in and out of two different types of turbulence, causing it to ‘knuckle’.

Then there was the other stuff; uproar over Goal Line Technology, astonishment at the weight of the adidas F50 adiZero and some even invested a lot of effort into arguing the benefits of the skin-tight adidas TechFit jerseys.

But if there was one piece of geek-tastic technology that went relatively under the radar, it was arguably the thing that was most noticeable on the pitch. I am, of course, talking about the Nike Elite Series Football Boots. 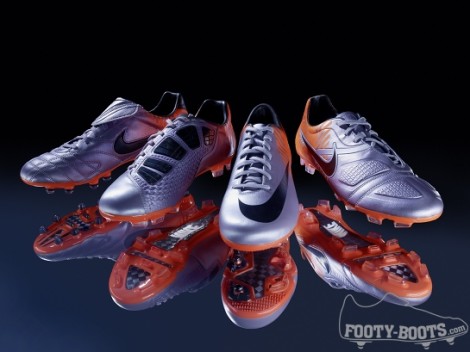 Firstly, let’s get this out of the way, the Elite Series is an utter masterstroke of marketing by Nike. In the age of HD televisions in homes across the world, and giant screens in pubs and clubs, the Elite Series shone spectacularly – more specifically – it glowed luminously.

They were infinitely more noticeable than a Kia Motors hoarding or a Hyundai Coach and more frequent than a Jabulani bobble! Rather than seeing the occasional bright-yellow Mizuno Wave Ignitus, or the two purple adidas F50 adiZeros, audiences could only see one thing, the pitches were dominated by these Orange boots.

We reckon even fans in the cheap seats could spot the Elites (sorry!)

You and I know that there were 4 different key football boots on show (in fact there were probably a dozen permutations of Nike boots, if you include the Vapor VI and all the customisation that went on!) but the average bod at home (and indeed the more easily influenced kids of the world) just saw that the overwhelming majority of the best players in the world wore bright Orange boots.

And what did people find when they looked online or in shops for these boots? They were the top of the tree in the boot world, all-singing, all-dancing Carbon Fibre-infused monsters, with price tags to match – and are immediately distinguishable from any boot they’ve ever seen before.

Which leads me to the point of this piece, why release Elite Series football boots that look identical to the rest of the football boots in the Silo?

Firstly, they’re nowhere near as visible on the pitch. The average Joe isn’t likely to watch his Wayne Rooney in the new season and think “Ah yes, I can see he’s got a Carbon Fibre soleplate on those, he’s in the T90 Laser III Elite! I’ll buy those for the new Sunday Season.” He’s more likely to think “Red Nike footy boots, I’ll get them if they’re at a good price”. 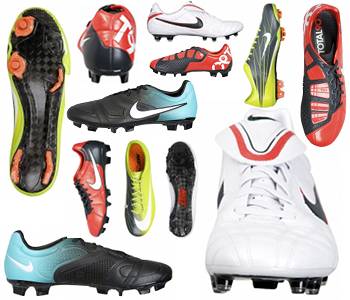 Secondly, one of the things included in the ‘Elite Package’ was the Visual Performance aspect of the boot – the idea that in brightly coloured boots, your team-mates are more likely to spot your feet – none of the new colourway Elites can boast that feature anymore.

This also loses the ‘all-together’ look all the players in the Nike stable had at the World Cup, it’s no longer immediately obvious what percentage of the players on the pitch are in Nike football boots.

The only advantage that we can think of is that it ties everyone into their boot of preference quite nicely. For example, it’s no longer obvious which players are wearing the Elite CTR360 and which ones aren’t, which prevents them devaluing the line of boots to the general public.

All-in-all, as much as we love the Nike Elite Series, we’d have liked to see them either kept in all their glory, with some more ludicrous bright colourways for the new season or left at the World Cup entirely, as a testament to the marketing mastermind that is Nike.

Have we missed something out? Do you think you have more reasons as to why Nike would release Elite versions of Regular colourways?