Under Armour have been one of the more buccaneering brands when it’s come to taking a chunk out of the lucrative speed market.

Their distinctive Blur Pro ranges of football boots have strived to innovate, but so far haven’t exactly set the world on fire. The bods in Baltimore will be hoping the Under Armour Blur Spine is set to put them back on track!

Late last year we checked out the upcoming Blur Carbon III, a trail-blazing new release from Under Armour, which brought Carbon Fibre to the soleplate of the Blur range for the first time, and a whole host of new technologies – and a more-than-respectable 177g weight point.

Whilst not as technically jam-packed, the Under Armour Blur Spine is cut from the same mould as it’s bigger brother, and manages to be a top-performing football boot in it’s own right, rather than your average takedown model. Think of them more like how the Vapor VII was to the Superfly III.

So, what does Under Armour’s new design do to change the game? 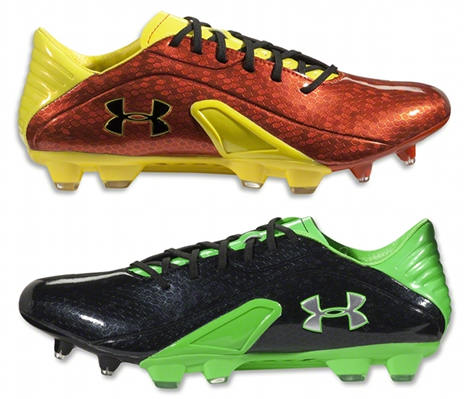 Well, the big innovation on this model is the ‘wing’ you see on the outside of theUnder Armour Blur Spine’s midfoot. This firm TPU feature supports the foot when making sharp movements, preventing your feet and ankles from rolling.

This is teamed with a uniquely-designed heel that features anatomical grips and ridges to reduce slippage, the Under Armour Blur Spine is designed to lock the foot in place for superior support and traction. 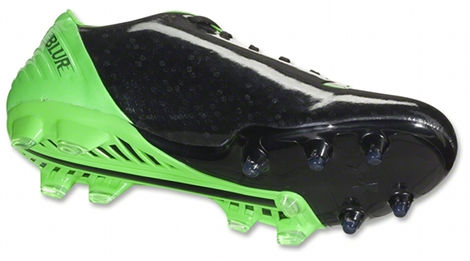 This new design on top of the boot has allowed Under Armour to be a little more traditional in the designed of the soleplate. Mixing conical and bladed studs, the Blur Spine hopes to offer stability and even weight distribution in the heel and out step, whilst offering conical studs under the toes for better ball feel and cleaner turns. 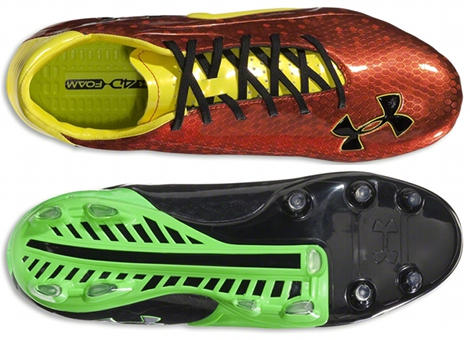 As you’d expect from Under Armour, their 4D foam footbed makes a welcome return to offer a comfortable ride, and unlike it’s Carbon-infused stablemate, the Under Armour Blur Spine uses a traditional tongue with it’s lacing system to hold the microfibre upper in place – a change many will appreciate from the oft-disliked wraparound design on the Blur Carbon III.

However impressive the feature-list is, the Under Armour Blur Spine has two vital figures that are well worth mentioning: At 209g, the might fall just shy of the 200g barrier, but it outstrips many other speed boots – especially with it’s $99.99 price-tag.

Launching in the distinctive Black/Poison/Silver and outrageous Vivid/Sun Bleached/Black – what do you think of the Under Armour Blur Spine?

UNDER ARMOUR SPINE BLUR, 6.4 out of 10 based on 26 ratings https://www.footy-boots.com/wp-content/uploads/2013/01/under-armour-spine-blur-featured-image.jpg