It seems like eons ago when we first revealed that Under Armour were trailing and tweaking the follow-up to the under-rated HydraStrike Pro. But it looks like UA are finally ready to hit retail with two great launch colourways, and we’ve got all the details.

Eschewing the neon and pastel shades that have dominated pitches this summer, the Under Armour HydraStrike II makes it’s retail bow in two delightfully understated colourways.

First up is the White / Red / Black we’ve seen in preview photos, finally available for up-close inspection. If ever there were three colours that are guaranteed to look good on a boot, it’d be these three – so UA are definitely playing it safe on their latest boots.

Whilst most of Under Armour’s ambassadors had been clocked in ‘White-out’ prototypes, it seems that the Baltimore brand are more keen to give the people what they want from the get-go with this lethal-looking Black / Black / Charcoal model. 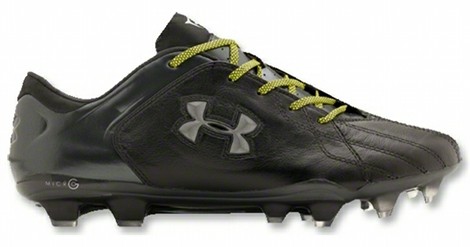 Expected to be given their ‘official’ on-pitch launch in pre-season, on the feet of endorsers Bobby Zamora, Michael Dawson and Paul Robinson, we’d have to guess that it’ll be the White / Red / Black Under Armour HydraStrike II we’ll be seeing the most of on the pitch.

As with previous Under Armour football boots, the focus of the HydraStrike II is player comfort and performance – with the Hydrastrike’s main objective to work with the natural mechanics of the foot to allow quick changes of direction and unpredictable darts into space and past the opposition.

A K-Leather upper is something that’ll appeal to many in a marketplace where synthetic boots are fast becoming the norm, and the non-too-shabby weight of 223g / 7.9oz puts them in the same ballpark as the adiPure 11pro and Puma King SL.

The special ‘CoreSpeed’ plate is designed to reward players who spend the game ‘on their toes’ by offering superb traction when making rapid movements, and – as you’d expect in a UA boot – the HydraStrike II is highly-gear for comfort, with a moulded antibacterial 4DFoam footbed and UA’s MicroG, a revolutionary light and low cushioning innovation.

On sale in the US from this week in the US, expect to pay a wallet-friendly $124.99 for the UA HydraStrike II, with a UK release expected to coincide with the reveal of the new Tottenham Hotspur Kit ahead of the 2012-13 season.

UNDER ARMOUR HYDRASTRIKE II LAUNCHES, 7.9 out of 10 based on 19 ratings

Written By
Kyle Elliot
More from Kyle Elliot
Engines at the heart of every team will now have a new...
Read More