After bringing you a first look at the outrageous new Under Armour Blur II, we can continue to look forward to more exceptional new football boots from the American Baselayer giants as they reveal the Under Armour Hydrastrike II for 2012. 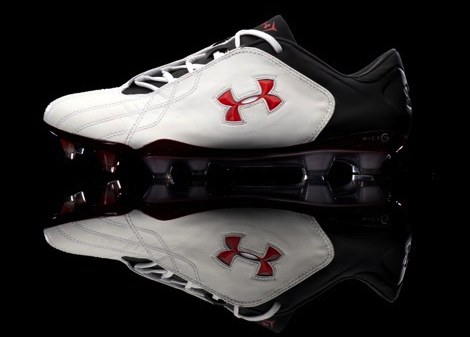 Now, if you think there’s something a little familiar about the Under Armour Hydrastrike II, you’d be absolutely right!

Under Armour’s top athletes – including England internationals Bobby Zamora and Michael Dawson – have been wearing pre-release versions of the Hydrastrike II since around October last year, and have showed up in numerous boot-spotting articles here on the Footy-Boots.com.

But despite having been on public display for the best part of five months, Under Armour have done a sterling job at keeping the details under wraps – but we’re here to give you the full run down on their latest cleats.

Starting with the upper, Under Armour have built upper the design of the original Hydrastrike Pro by teaming a soft, supple leather forefoot with a synthetic heel.

As usual, the leather from UA is top drawer, with the Hydrastrike II boasting H2Oi treatment, that allows the boot to stay drier (and lighter) for longer in challenging conditions. 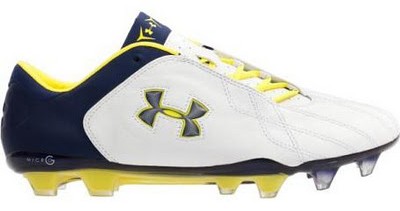 As is always the case with Under Armour, player comfort is high on the agenda; a Softlin tongue improves comfort and improves feel on the ball, whilst an asymmetrical lacing system with hidden lace loops pulls the whole unit snug whilst offering a supreme striking surface.

Those familiar with previous Under Armour football boots will be pleased to see the return of the MicroG cushioning and 4D foam used in the footbed. Combining these two technologies offers the Hydrastrike II an unrivaled level of comfort and responsiveness.

Two new pieces of tech on the Under Armour Hydrastrike II are Strobel construction – that allows the foot to be closer to the ground without compromising stability – and a new CoreSpeed sole, with wider outlying studs and a configuration similar to the highly-regarded Intertract sole of the Nike AZT90 boots of the early 2000’s.

Oh, and did we mention that the brains at UA have managed to get the whole boot weighing just 223g? That’s over 35% lighter than the 2011 version – and an incredible feat for a boot as feature-packed as this.

Slated for a release in May, expect to see the Under Armour Hydrastrike II retail for around £119.99.

UNDER ARMOUR HYDRASTRIKE II, 7.8 out of 10 based on 44 ratings https://www.footy-boots.com/wp-content/uploads/2012/03/UNDER-ARMOUR-HYDRASTRIKE-II.jpg

Written By
Kyle Elliot
More from Kyle Elliot
adidas' lastest gets an all-new leather upper - we see how it...
Read More