Speaking at an event yesterday, Under Armour’s top man revealed his dream of one day making the famous Three Lions strip for the England National team.

Plank made his fortune by providing the first field-sports-specific baselayers, after admitting he was sick of changing out of sweat-soaked t-shirts after a game.

But successful kit deals with the likes of Hannover 96, Estudiantes Tecos and the Welsh National Rugby Team, Plank admits it’d be a dream to get to see players walk out at Wembley in an Under Armour shirt, not just his baselayers and football boots.

Asked if he would want to sponsor the England team’s kit Plank said: “It would be great – who do I talk to!?

“I know they have had a long-standing relationship with Umbro, but we are in a position to be a little more aggressive towards the approach and the way we see our opportunities in the UK.

“We believe we can be successful here, we have a different set of resources now our turnover is approaching $1billion and when we find the right assets and teams, we will make some big events.

“Our goal is to be a global business which would mean more than half our business comes from outside our home country.

“We are planting seeds and you are seeing us make bigger and more aggressive investments.” 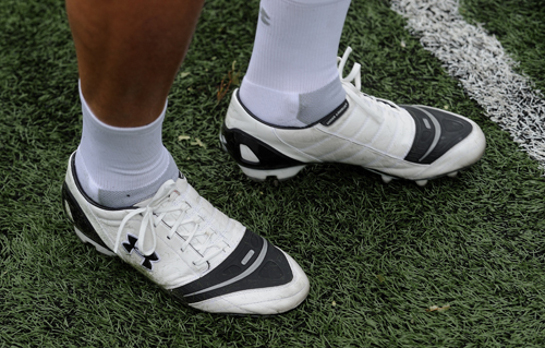 Under Armour entered into the world of football boots less than 18 months ago!

But Plank admits it will be tough to win FA approval to make the next new England kit:

He added: “It normally works with who writes the biggest cheque but it is also about who has the best relationship so we are trying to understand the culture.”

Would you like to see the a change away from Umbro for the England Strip?

It’s unlikely that Nike would oust Umbro from the famous shirt, as it would damage the income they get from the Manchester-based brand, so someone like adidas, Puma or even Under Armour would be potential replacements.

Umbro have been making England Kit as far back 1954, and it’d seem strange to see another brand on the kit – we reckon Under Armour should stick to gaining a reputation for quality football boots before they try anything this ambitious!

Though that wouldn’t happen for quite some time, as Umbro has an agreement with the FA until 2018.