Whilst Under Armour saw it fit to re-vamp the Create Pro after a year on release, it’s great to see them sticking by the Dominate Pro and slowly releasing the occasional new colourway to keep it fresh.

And boot colourways don’t come more fresh than this White/ Graphite/ Blaze Orange incarnation of one of the most solid all-around football boots on the market!

By our count, this is only the second new colourway of the Dominate Pro (outside of the classic launch schemes of Black/White & White/Black and limited edition Pink women’s model), so all credit to Under Armour in not spamming the market with constant new colourway updates! 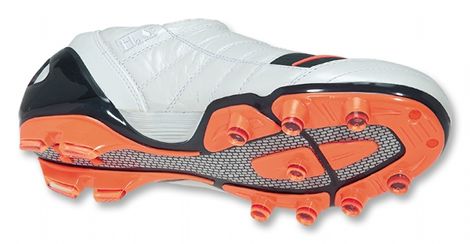 This particular colourway is markedly similar to the launch White/Black, but uses a generous splash of blaze orange to liven things up in the soleplate, laces and Under Armour branding, making this the boldest Dominate Pro yet!

We can only guess that Orange is the ‘must-have’ colour for football boots at the moment, as the Nike Elite Series and adidas’ Warning adiPure III‘s both sport bold orange proudly!

For those new to this range of football boots, the Dominate Pro range is all about combining comfort and safety into a modern boot that hints back to more old-school design.

It features one of the best external heel counters we’ve ever tried on a boot, and Under Armour’s signature Metatarsal Protection Zone – or MPZ – an impact resistant strip of rubber, designed to allow a greater ease of movement in the toes and protect the top of the foot from impact injuries.

The Under Armour Dominate Pro impressed us when we tested it last year, with particular praise being heaped on it’s focus on comfort and feel.

The White/ Graphite/ Blaze Orange Under Armour Dominate Pro is currently available now for order in the US, with a European release still to be confirmed.

What are your thoughts?

Use the boot-o-meter to rate this release!

UNDER ARMOUR DOMINATE PRO WHITE/ BLAZE ORANGE, 7.3 out of 10 based on 29 ratings