It’s all gone a bit quiet in the Under Armour camps since the launch of the Create Pro II – but thankfully the Amercian brand have sent us over a brand new colourway for the Dominate Pro in a very contrasting Black/White Radiant Red! 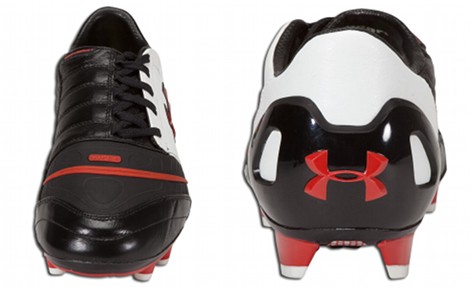 After the last White/Graphite/Blaze Orange release, we were wondering whether Under Armour would be considering an update to the Dominate range, but it seems that Kevin Plank & co are keen to keep the Dominate range ticking over ‘as-is’ for the time being, at least.

And with good reason too – this latest incarnation shows that there’s still some mileage in the Dominate Pro‘s design as Under Armour play with contrasting different parts of their signature football boots impeccably designed upper. 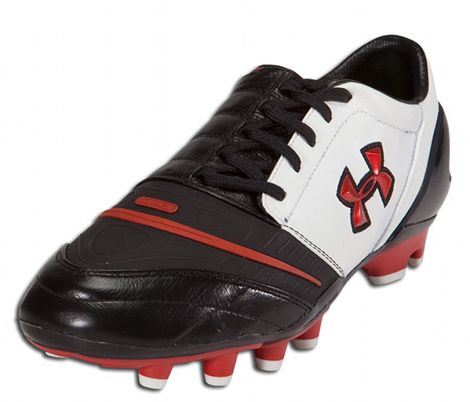 In this case the glossy leather toe and instep is nicely offset by the soft leather outstep making these football boots look a little like a pair of 30’s Jazz spats!

This incarnation of the Dominate Pro adds a third ‘pop’ colour in the form of the metallic Radiant Red, used on the Under Armour branding, soleplate and MPZ across the toe.

It definitely gives this Dominate Pro a slightly more sinister look (and definitely much darker than the well-received Blaze Orange), as such, we can see it being very popular on the pitch.

Whilst Under Armour’s roster of players is relatively short, looking at these football boots we reckon it’s no coincidence that they’re being released at a time when Bobby Zamora is eyeing a return from injury.

There’s absolutely no question that these cleats would be great match for the Fulham home kit, and to some extent, the England home kit!

The Dominate Pro‘s were one of Under Armour’s first two entries into the football boots market, and have been on the shelves for more than 18 months now! With a unique H20i water-repellent leather upper and a design focused on comfort and protection, it’s been good to see the Under Armour Dominate Pro be something of a success for the baselayer giants.

Are these a good look for the Dominates or would you rather see something new from UA sometime soon?