Under Armour have given us an exclusive look 3 custom football boots they’ve made for some of their top USWNT stars ahead of tonight’s top-of-the-group clash between traditional heavyweights the US and Sweden!

Before shipping out to Women’s World Cup, Under Armour gave three of their highest-profile players the chance to design their own unique pair of Hydrastrike Pro football boots to take with them to Germany – here’s what they came up with;

Long-serving defender Heather Mitts opted for Under Armour’s Hydrastrike Pro in a colourway that really catches the eye!

Billed as Blue/Hi-vis Yellow, we think that doesn’t quite do these cleats justice, as the blue has a colour-shifting effect on the leather, similar to Messi’s World Cup Chameleon adiZero football boots from last year!

With Pink lining and stitching on the toes, there’s a subtle feminine edge to these otherwise bold football boots – and the Philadelphia Independence right-back has even had Under Armour add a subtle tribute to her husband – St Louis Rams Quarterback A.J. Feeley added to the toe! 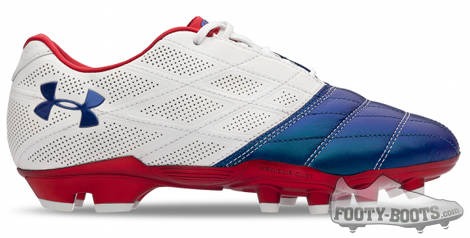 We already had a preview of Cheney’s patriotic kicks when she scored the USWNT’s opening goal of the tournament against North Korea, but now we can get a great, up-close look!

Clearly taking inspiration from the famous Stars & Stripes itself, there’s not really any better colourway for an American to wear at a World Cup.

Perhaps we could see other brands following Under Armour’s lead and colouring their football boots in country-specific colourways for big tournaments – a bit like adidas did with their World Cup 2006 Tunits?

Now, if there’s any colourway of these three football boots that deserve to get a retail release of their own – it’s tough-tackling Becky Sauerbrunn’s design!

Not only will they prove an intimidating sight for any defenders that come up against the USWNT newcomer, they’re also a fantastic match for the Nike-designed away kit!

Mitts & Cheney are currently starring in Under Armour’s campaign focusing on the hard work and preparation they’ve put in as they try and bring the World cup back to the States, but with the likes of Brazil’s Marta, reigning Champs Germany and a strong England side, it’ll be no easy task!

Who do you think will come away from Germany with the Women’s World Cup this summer?