Under Armour have been quietly ticking over as we head towards the end of the year – the US brand have acquired the signature of USMNT World Cup hero Jermaine Jones, and have somewhat quietly been slipping Black and White versions of their lead boots on to the feet of players and staff at Tottenham Hotspur.

Now, it looks like the baselayer brand are looking to kick off 2015 in a big way with the Under Armour Clutchfit Force – White / Black / Red. 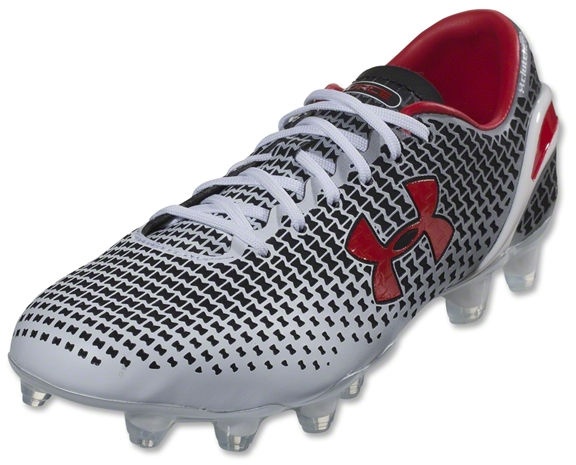 Available in the US this month, and with a European release still TBC, the Under Armour Clutchfit Force – White / Black / Red is a handsome looking pair of football boots, to be sure.

The white and black base is – of course – a great look, whilst the red branding, details and lining definitely give the boot a clean aesthetic with a great bit of pop.

As with the last handful of colourways, Under Armour have made the most the Clutchfit Force‘s texture surface to create a look that gives the boot a great on pitch identity.

The white upper layer is underpinned by black, whilst a smokey grey fade keeps the visual interesting towards the back of the boot.

The Under Armour Clutchfit Force was, without question, one of the surprise packages of 2014 for us here at Footy-Boots.com.

After a series of solid, but unremarkable, releases in previous years, the Clutchfit felt more like a true ‘statement’ release, with the two-way stretch Trivella microfibre base and overlapping rubberised cage providing a wonderful level of touch and grip, as well as unique lockdown fit. 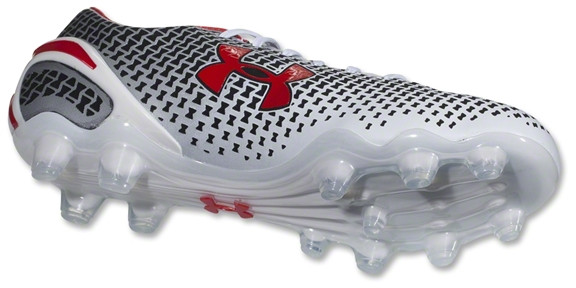 Also no slouch is the soleplate. Mimicking the skeletal pattern of the foot, the Under Armour Clutchfit Force creates a very responsive platform, with solid traction and minimal stud pressure.

Features like a 4G foam footbed and MicroG lining also do little to harm the Clutchfit’s growing reputation as a boot that caters to players needs for fit and touch like little else on the market.

What do you think of the Under Armour Clutchfit Force – White / Black / Red?

Written By
Kyle Elliot
More from Kyle Elliot
We bring you a selection of the niftiest football boots never to...
Read More