One of our favourite new silos from 2014 so far, Under Armour’s Clutchfit Force look set to be a favourite with players of all levels boasting a mix of comfort and technology – and this new White / Black / Hi-Vis Yellow update won’t do it any harm, either.

After standing out in bold blue and yellow colourways for it’s launch – and even going all ‘Murica with a special World Cup colourway – the Baltimore baselayer giants are offering up something a little more understated on the Under Armour Clutchfit Force – White / Black / Hi-Vis Yellow. 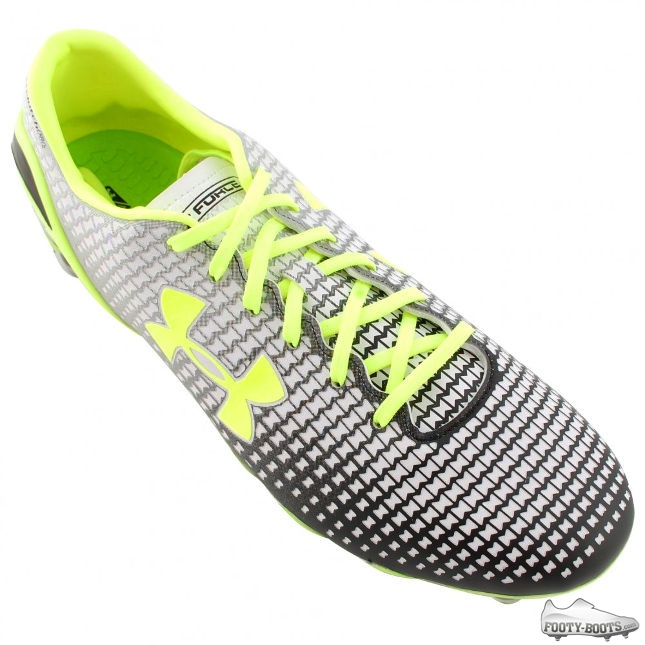 A classic Black and White Upper with Hi-Vis ‘Pop’ branding, laces and soleplate detailing are what this colourway is all about and it definitely works on the Clutchfit Force.

For anyone wondering what Under Armour’s latest football boots are all about, the answer is fit and feel.

Under Armour have always made comfortable cleats, but the Under Armour Clutchfit Force takes that platform and uses an upper and soleplate that brings the upper closer to the foot for decisive ball control in the moments that make the game.

The two-way stretch Trivella microfibre upper is encaged in a 3D printed rubber material, allowing the upper to move with the foot, whilst the rubber prevents over-stretching and boosts grip.

A classic central-lacing system and 4-D comfort footbed promote a stable, padded ride, whilst the unique soleplate design adds adaptable traction that responds to the downward pressure created by the foot.

If you think these are up your street, they’re available via the Footy-Boots.com store now.

Let us know what you reckon to the Under Armour Clutchfit Force – White / Black / Hi-Vis Yellow, in the comments!

Under Armour Clutchfit Force | White / Black / Hi-Vis Yellow, 7.5 out of 10 based on 4 ratings https://www.footy-boots.com/wp-content/uploads/2014/08/under-armour-clutchfit-force-white-black-hi-vis-yellow.jpg

Written By
Kyle Elliot
More from Kyle Elliot
The Magpies get some new feathers for their first season back in...
Read More