With the USMNT playing their first game in the 2014 World Cup Finals tonight against Ghana, we couldn’t think of a better time to show off this limited-run Clutchfit Force colourway from Under Armour.

Inauspiciously dubbed ‘USA Red / White / Blue’ (I mean, what else could it be called?) this colourway will be exclusive to some US retailers for the duration of the tournament and will likely provide a definite talking point for the next month. 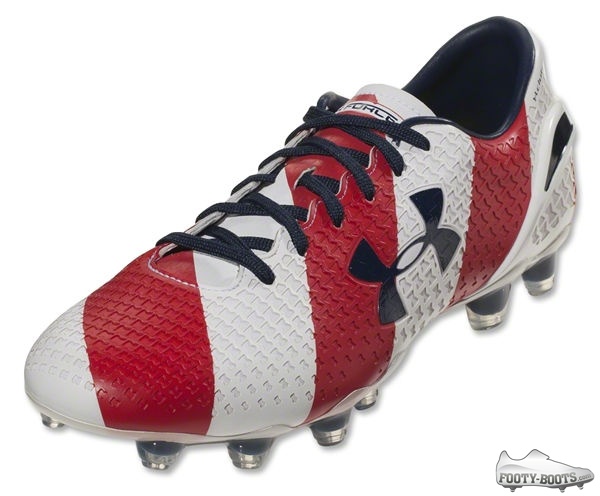 The newly-released Clutchfit Force has represented a bold new style of boot from Under Armour, and whilst the launch colourway is gorgeous, we can definitely see this new version creating a little more interest around the boots.

Under Armour are set to surprise us with a couple more limited-run colourways throughout the World Cup, and we think this is a pretty great start.

Which is, of course, only fitting for a pretty great boot. We managed to get our hands on a pair earlier this month and there can be little doubt that Under Armour have a winning formula on paper.

Drifting away from categories or tags like ‘speed’ or ‘power’, the Baltimore baselayer giants have instead allowed comfort, fit and touch to dictate the design and elements of the Clutchfit Force.

The upper is a Trivella microfibre imbued with two-way stretch capabilities, allowing the boot’s central lacing system to pull the whole shoe snug for a seamless fit. Those distinctive hourglass shapes are the hallmark of a 3D-printed, rubberised cage that creates a second layer for an enhanced touch.

The soleplate uses a distinctive five-spine system that mimics the bones in the foot for a flexible, forgiving and adaptable ride; something that’s only enhanced by a 4D foam footbed for assured comfort.

This ‘Old Glory’-inspired colourway is on-sale new at US retailers, including the North American Footy-Boots.com store, so if you’re feeling patriotic – you know where to buy ’em.

US readers – are these boots a little too extrovert for your liking, or if they ran these up the flag-pole, would you salute?

Written By
Kyle Elliot
More from Kyle Elliot
What gear are you packing to make this your best season yet?...
Read More