One of last year’s most surprising football boots gets an equally surprising follow up, as the baselayer brand from Baltimore reveal the Under Armour Blur II!

Under Armour are looking forward to a big year in 2012, as they bring a new range of baselayers to the fore (9 Core), have a number of sponsored athletes competing in the 2012 Olympics, and – perhaps most excitingly – begin the sponsorship of their first Premier League team, as they start supplying kits to high-flying Tottenham Hotspur from the summer.

Also to come from the Amercian brand is a whole new line of football boots to look forward to, and kicking the year off is the Under Armour Blur II. 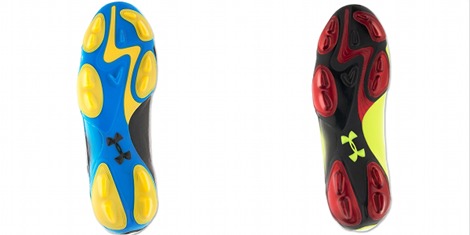 More evolution than revolution, the new Under Armour Blur II is a slightly tweaked upgrade to last year’s Blur Pro, bringing to the table almost everything it’s predecessor did.

This means the MicroG cushioning and 4D foam footbed are still employed to keep your feet comfortable and secure, whilst the outrigger stud design gives your feet optimum traction on firm ground, for improved acceleration.

As for the the rest of the design, Under Armour have slightly tweaked the fit and shape of the Blur II. The result is a more supportive ankle, and a tweaked toebox that improves contact with the ball.

The upper material on these two colourways also lacks the perforation of it’s predecessor, making them more waterproof. 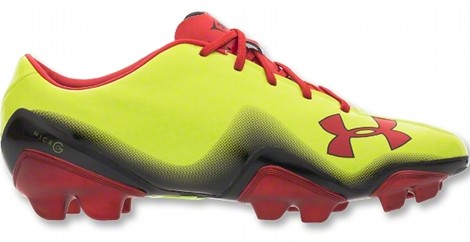 Under Armour have also priced their latest soccer cleats at a very competitive $99.99, making them one of the cheaper ‘speed’ boots on the market – whilst their 8.6oz / 243g weight makes them one of the more substantial.

Available in two outrageously bright colourways (Velocity / Black / Red and Black / Capri / Sun-Bleached) , the Under Armour Blur II ships from mid-February, and is available to buy from the Footy-Boots.com US store, now.

Written By
Kyle Elliot
More from Kyle Elliot
There's something strange in our neighbourhood... and it's the adidas Predator Instinct...
Read More