Many football boots come with claims to boost shot power or enhance speed, but few football boots are marketed with the bravado of the Under Armour Blur Carbon III.

According to the box by putting these on, you are about to become the ultimate direction-changing machine'. Under Armour, we love your confidence.

At least the tagline leaves little doubt as to the nature of Blur Carbon III's MO – These are the Baltimore base layer brand's fastest ever boots and feature a raft of technology designed to help support your feet through a variety of changes in direction to give you the advantage on the pitch.

Taking the Blur Carbon III out of the box, and it's clear Under Armour have aimed to make the Blur III as futuristic as possible. Having had mixed success with the last two Blurs, the latest edition looks simultaneously like a more traditional boot than it's predecessors, whilst still breaking the mould a little.

Props must be given to Under Armour for the extra TLC given to the packaging of these boots, making them feel like a truly premium release.

Not only is the reflective box a step above other offerings on the market, but the boot bag is actually pretty decent, too, with branded adjustment straps and a much weightier, durable feel than other branded bags.

Chuck in a pair of lighter, less padded insoles, an extra pair of laces and a rubber thingy that we think is meant to keep your spare insoles together and Under Armour earn brownie points out of the gate for presentation

The boots themselves are no slouches in the presentation department either, launching in race-car red with holographic print, chromed-out silver flank and matte black heel wrap and there's no doubt that these are one of the most eye-catching releases of the last twelve months. 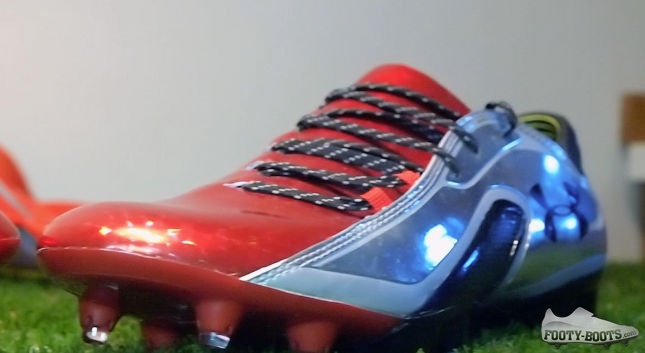 The upper's bold aesthetic is wrapped around a reenforced synthetic upper that goes feel surprisingly stretchy, with a good level of give whilst still being super thin.

Whilst all that will likely translate into a great fit, we go have concerns on the frictionless design of the upper making ball control difficult in wet weather. That said, boots like the Puma v1.11 and first synthetic adiZeros had little in the way of grip and still proved to be great performers, so we won't judge them just yet.

One thing that is worth pointing out is how stripped back these boots are on the inside. If other boots are high-tech super cars, then the Under Armour Blur Carbon III is Formula 1, with all the luxuries stripped out in the name of lowering weight

The heel cup is barely thicker than the upper, with little to no padding, suggesting Under Armour believe they can lock the boot into this area using other aspects of the boot to keep comfort up. Under Armou have a history of comfortable boots, and here on the Blur III they have continued to utilise the 4G foam and MicroG cushioning that has proved successful in the past – but given the minimalist nature of the boot, we can't wait to see if that's enough to balance out the lack of padding elsewhere on the interiors of the boot.

On to the Tech that gives the Blur Carbon III it's name; the lateral side of each boot boasts a Carbon Fibre wing running up the side of the mid foot – Under Armour claim this wing works with the upper and soleplate to keep reenforce the boot and stabilise the foot, creating more responsive traction and stabilising the foot when making lateral movements. 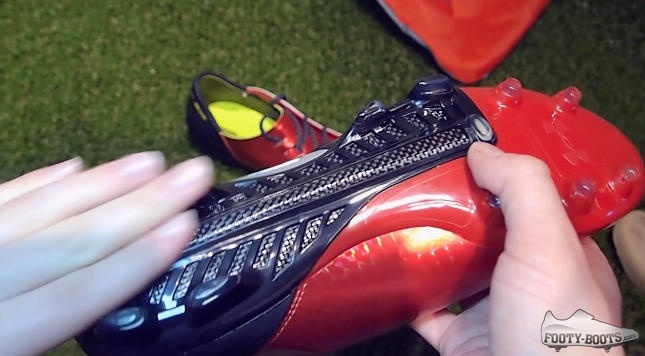 The rest of the traction plate is no slouch in the innovation stakes either; split into two pieces, the rear has a spine of Carbon Fibre running through a Pebax synthetic for a huge level of support and improved energy transfer when sprinting and striking. We might go as far as to say this is one of the stiffest soleplates we've ever felt – but with enough flexion under the toes, we're definitely excited to see how this whole system comes together on the pitch.

Elsewhere on the soleplate, Under Armour have a combination of bladed and conical studs, something we're seeing become more commonplace on boots like the Puma King and Tiempo Legend.

Here, Under Armour have undoubtedly used it for similar reasons as Puma and Nike; the conical studs are for quick engagement and disengagement of the turf and freedom of movement when turning on the spot, whilst the bladed studs allow greater traction when planted the foot to strike or turn.

All in all the Under Armour Blur Carbon III is an incredible array of ideas that seem daunting on their own; minimal upper, wraparound tongue, very little heel padding and a super-stiff mid foot spine.

However, the big question is whether Under Armour have managed to bring all these high-risk concepts together on a boot that makes them work in a way no other boot has before.

To find out, you'll have to stay tuned to Footy-Boots.com and on the Youtube Channel for the full review, coming within the next few weeks.