Umbro in June release a raft of new football boots, the Ultra SX, X Boot III colourway update and X Boot Destroyer colourway updates (Read the article). Footy Boots brings you details of the new football boot that will be worn by Chelsea’s John Terry, the new Umbro X Boot Destroyer. The Destroyer has been marketed by Umbro as a product that is targetted to defenders and includes England’s under 21 star Nedum Onuoha.

Umbro have updated the technology and design in the latest incarnation of the Destroyer, and the sparkling silver colourway marks a change from the more sober blue colourway which dominated the previous version. As ever, Umbro has maintained its successful wishbone technology, incorporating its motion control for stability and protection. The upper features a wider comfort fit system made from ceramic kangaroo leather. As required for hard- tackling defenders, protection again plays a major part of the design, with a new impact control system which features lightweight enhanced protection.

Verdict: An exciting addition to the Umbro X Boot Destroyer range, and great timing from Umbro as John Terry, England and Chelsea captain, remains a key figure in English football. Umbro are making a serious challenge to the big-boys, but it will be on the field of play that this football boot needs to shine. 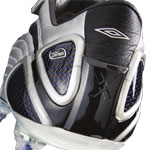 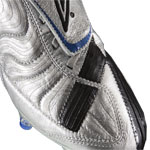 Written By
Felipe
More from Felipe
Ex-Spurs Legend Graham Roberts On Tottenham’s Summer of Transfers As the season...
Read More