Even Umbro would admit that they've been out of the game for a little while. Since a change of circumstances for the British brand, Umbro have been biding their time a little and have burst back into action over the last couple of months.

Signing new kit deals with Everton and Hull City Umbro are building up a mighty head of steam ahead of the start of next season, and the latest product of that momentum is the UX-1

With a name like a military aircraft, you'd expect the Umbro UX-1 to have a few bells and whistles in it's design. But better than that, the UX-1 is a technical monster!

For starters, let's talk about that Upper. With a lot of focus on knitted football boots this summer, Umbro have found a compromise with a lightweight textile material with incredible durability properties.

It's hard to explain exactly what it is, but think about the covering on mountain climber rope; it's flexible enough to be tied in knots, but durable and high-tensile enough to handle anything that's thrown at it.

And it's also worth mentioning this is a single-piece upper, so expect a seamless touch and the sort of fit that moulds to your foot. 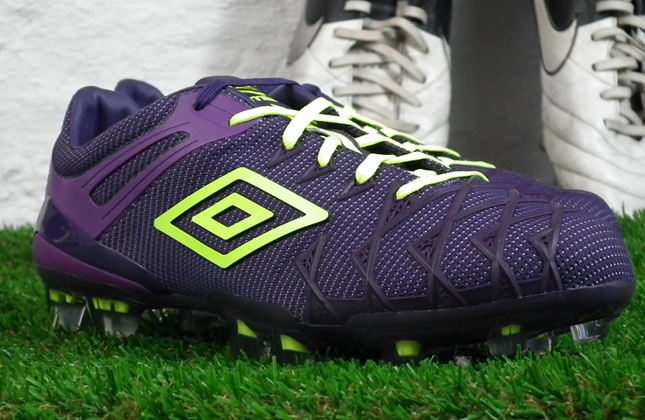 Enforce that and augmenting feel for the ball is this sleek webbing that forms the Touchzones. These aggressive raised rubber zones across the forefoot, toe, instep and medial areas of the boot create a great trap for controlling the ball and add a little extra bite for shots and crosses.

One of our favourite features of Umbro boots past also makes a welcome return; the A-Frame support system is back and better than ever.

Working with the lacing system, when you pull the Umbro UX-1 tight, your foot is locked in to the soleplate and heel counter for phenomenal support and lockdown traction. 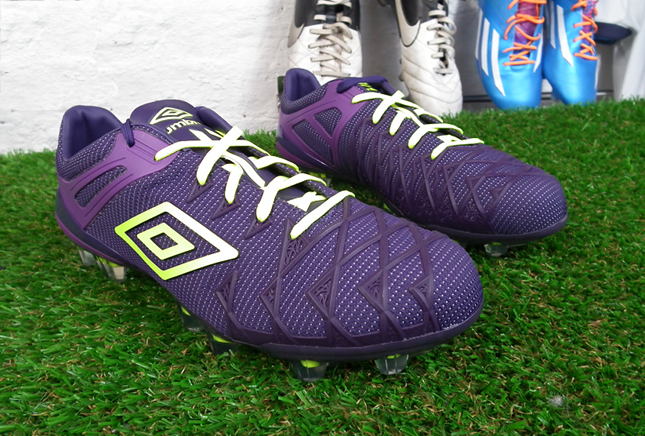 Speaking of the soleplate, you might well note that this is a slightly modified version of the plate used on the Stealth Pro from back in 2010. Umbro have taken on feedback from athletes of all levels to create a plate that offers that same great grip on a multitude if pitches, but it more flexible in the forefoot for a faster break in time and a more responsive ride.

Also integrated into that plate is the external heel counter; something that's a little out of fashion in modern boot design, Umbro are continuing that sense of durability and protection established with the upper into the chassis of the boot.

Not only does the UX-1 boast a dual-density construction in this area, but Umbro have reenforced this with a protective spine that runs in line with your Achilles' tendon, bending with forces from inside the boot and safeguarding against blows from outside. 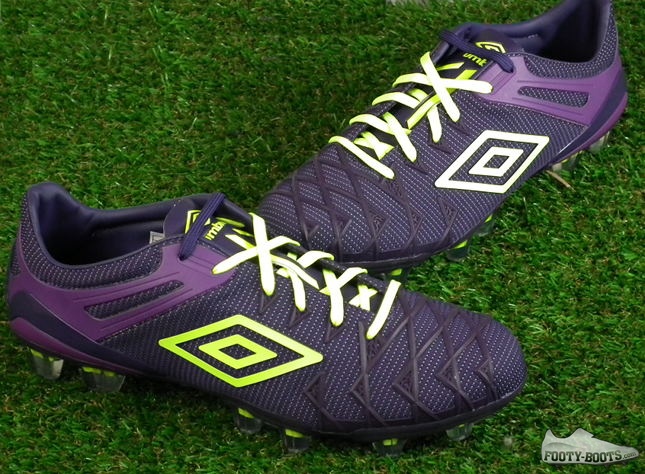 On the inside of the boot, Umbro have a smooth heel liner, which ends towards the front of the boot for a single layer between foot and ball; what's more you'll note that Umbro use Poron XRD Memory foam – which you might recall is the top-tier material used on the IXO €Worlds Most Expensive' shin pads – so you know you're going to get adaptable cushioning in the tongue and standard PORON in the heel and forefoot.