In celebration of the launch of the new England away kit, Umbro has created a special edition England colourway of its celebrated SX Valor worn by John Terry and the SX Flare, the preferred choice of striker Michael Owen. Both boast bold red, white and blue colour schemes, indicative of the pride and passion that each of them play with when wearing their England shirts, provided Fabio picks them of course. 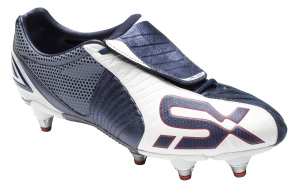 According to Umbro, their collaboration with Michelin (which sadly doesn’t include a free restaurant guide) serves to greatly enhance touch and feel for the ball, whilst players’ comfort is also taken care of thanks to the water resistant, ultra soft, high-grade leather, which keeps the feet dry.

As for which football boots us mere mortals should choose, Terry’s Valor lends itself to defenders in particular, so we can assume that they’ll automatically lump the ball in to row Z when the wearer is under pressure. The focus is on comfort, safety and control. A lightweight TPU heel counter and new kontact outsole with carbon fibre rigidity shank has been designed to keep the player’s foot stable and protected during the cut and thrust of the modern game.

Owen’s SX Flare meanwhile is probably not for the Saturday night kebab specialist having been designed for quick and skilful players as the lightweight material maximises pace and acceleration. The technology of the SX Flare will also aid control as well as looking after the players comfort and safety. 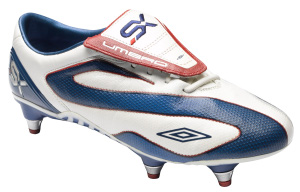 Viewers of Watchdog will be delighted to know that both football boots, which are on sale now, feature Umbro’s no nonsense control series labelling, which cuts out the jargon and explains the technology in clear, simple terms.

Written By
Felipe
More from Felipe
This weekend the Premier League match balls will be RED to raise...
Read More