Umbro continue their metaphorical roar out of the pre-season gates with yet another quality football boots colourway launch. This time it’s the Umbro Speciali R – White/Black/Vivid Blue that takes centre stage! 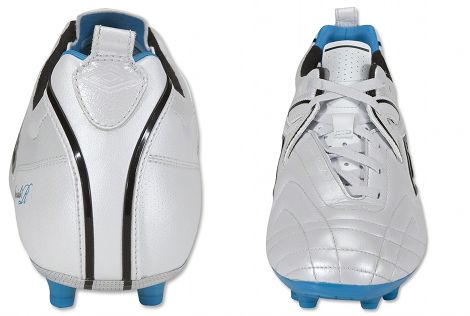 As with the new Black/White/Neon colourway, Umbro are really sticking to a winning formula when it comes to their heritage-inspired football boots.

Rather than taking risks on bright and divisive colourways, Umbro are keeping the Speciali R very ‘Pure’ in the image stakes by only colouring it in White and Black for the time being. 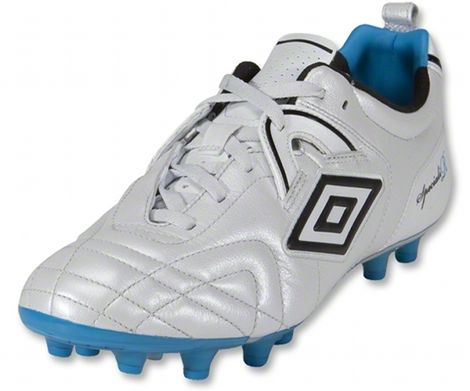 To stop it becoming the world’s dullest pair of football boots, though, Umbro bring a new secondary colour to each incarnation – like the fresh blue seen here on the Umbro Speciali R – White/Black/Vivid Blue!

We think it’s definitely the perfect summery match to the White and Blue on the Kanga Touch upper, and will definitely brighten up pre-season pitches across the World this summer – though we question how good they’d look after a couple of matches in the rain!

The Pearilsed effect on the White upper looks stunning up close, with a metallic sheen that really catches the eye and contrasts nicely to the black trim.

At 260g, there are certainly lighter football boots available on the market, but Umbro reckon that such a good looking boot with a depth of features like the Umbro Speciali R – White/Black/Vivid Blue will win over even the fussiest of customers.

Drop us a comment, or use the boot-o-meter to get your voice heard!

Written By
Ramsay
More from Ramsay
Umbro's lightweight speed boot has had an update for 2016. New upper...
Read More