Once again, Umbro stick to the ‘keep it simple’ philosophy' with great success. 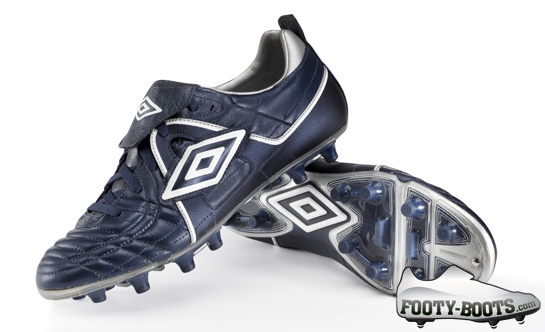 To coincide with the launch of the new Stealth Pro,' Umbro have launched a selection of new Speciali colourways' to make their presence known in the market.

This' mostly-navy number is a great fit for' the' Speciali’s design, using the white and silver to highlight the Wembley-inspired arc on the outsole of this classically designed football boot.

Another neat feature is the use of the silver on the heel, serving the highlight the highly-ventilated sockliner.

Unlike the other Speciali colourways released this season, there are the only ones not to feature a contrast colour on the studs – opting to keep the Navy from the upper continuing into the sole – thankfully! We were starting to think Umbro had developed a weird obsession with Gold studs!

Written By
Felipe
More from Felipe
He sinks his teeth into the topical football stories quicker than Drogba...
Read More