Another batch of Umbro releases, another classy colourway for the excellent Speciali 3 – this time out it’s the Umbro Speciali 3 – White / Black / Pewter.

When it comes to football boots you can really count on, Umbro have turned the Speciali 3  into a name very much at the top of the list.

After exploring their oldest range of football boots’ history on the Speciali ’92 at the back end of 2011, Umbro kicked off their 2012 in the best possible way with the new Speciali 3. 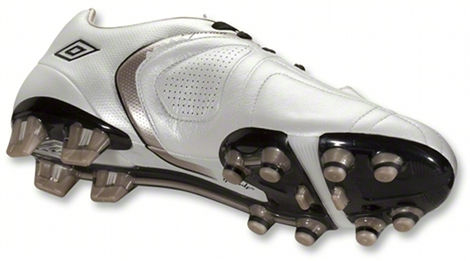 Opting for a lighter, more water-resistant KangaTouch upper than the relaunched 2008 Speciali, the Umbro Speciali 3 is a quality combination of classy design and modern technology.

And nowhere is that more evident than here on the Umbro Speciali 3 – White / Black / Pewter.

After launching their new heritage-inspired boots with splashes of  Vivid Blue and Nectarine, the Umbro Speciali 3 – White / Black / Pewter brings things back to the classic football boot designs of yore.

The monochrome upper is stylishly offset by the metallic Pewter, finishing off a really class-act of a boot.

Expect to see Darren Bent, John Terry and Andy Carroll in them this pre-season.

Written By
Kyle Elliot
More from Kyle Elliot
We want to know - What do you look for in a...
Read More