Umbro have become known for exceptional retro-style football shirts over the last 3 years, looking back to the 60’s and 70’s for inspiration. But for Manchester City’s big day at Wembley this weekend, Umbro are tweaking their classic blue kit to hark back nearly 80 years…

The unlikely source of inspiration? A telegram discovered in the club archives by chance dated 5 May, 1934.

Sent from Maine Road by club secretary Wilf Wild, the telegram is to thanks the Humphreys Bros (Hum-Bros – see where the name comes from?)'  for the “jerseys, knickers, hose, slips and anklets” used in the Wembley final seven days earlier. “The fit, quality and smartness of the entire outfit was undoubtedly perfection,” says the esteemed club secretary.

This curious discovery led Umbro to decide to use the same font as the squad used in the ’34 cup final when preparing Manchester City’s kits for this weekend’s FA Cup Final – “Many fonts in football look retro and rigid but this one has a real authenticity about it,” Said David Blanch, senior designer at Umbro, who discovered the telegram whilst researching designs for the kit.

The shirts and the Mercer warm-up jackets the players will wear when walking out to the hallowed Wembley turf all feature a number of intricate links to the historical detail of the kits City players have worn at Wembley. Discreetly featured within the numbers on the players’ backs is the historic Manchester coat of arms, which City players used to wear when they had no crest of their own. 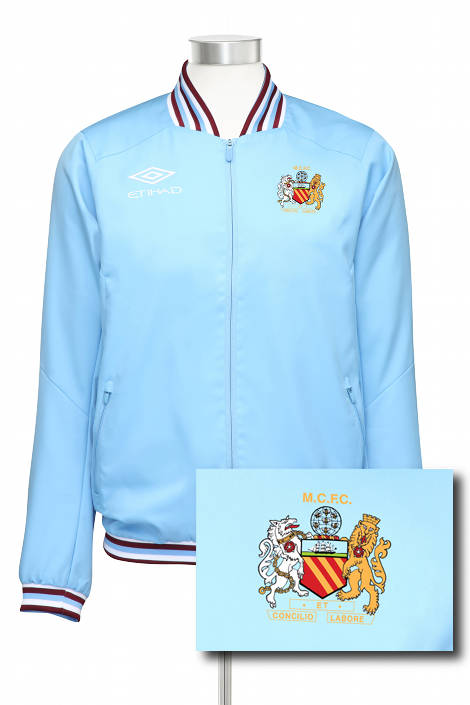 Whilst historically the crest was a privilege bestowed upon the club by Manchester city council, it has been adopted as tradition that City players will carry the coat of arms in some way when they play at Wembley over the last 60 years.

The shirt numbers have also been individually made with small holes enabling the numbers to “breathe” Ĺ› in a nod to the tailoring tradition of football jersey numbers being handsewn from fabric. “The shirts are inspired by the past, rather than mimicking it. We wanted to celebrate City’s achievement and to respect the past but also to celebrate where the club is heading. Manchester has deep roots in City and the club is continuing to build on that history.”

The Manchester coat of arms is also embroidered on to Mercer jackets City will walk out in, whose colour scheme is inspired by ex-City manager Joe Mercer, who fittingly lead the Blues to their last FA Cup final victory in 1969, beating Portsmouth 2-1.

As for what the finished product will look like? You’ll have to keep a sharp eye trained on the Manchester City player’s backs when they take to the pitch this Saturday!

Who are you predicting will walk away from Wembley the happier out of City & Stoke?

Written By
Kyle Elliot
More from Kyle Elliot
Peter Crouch takes to the pitches of Carperby in Yorkshire to celebrate...
Read More