Following on from the other launch of the Umbro GT Pro, Umbro have sent us pictures of their other launch colourway – White/Silver/Orange.

This cool, clean Umbro GT Pro is a far cry from the Black/Blue/Volt that is to be the other launch colourway.

We really like the sparing use of the orange, running it through the intuitive ‘A-Frame’ Support Arch and the studs; it really gives the boot a refreshing look, that’s unlike any boot we can think of recently (we think those new White/Orange adiPure III‘s looked more dangerous than refreshing!) 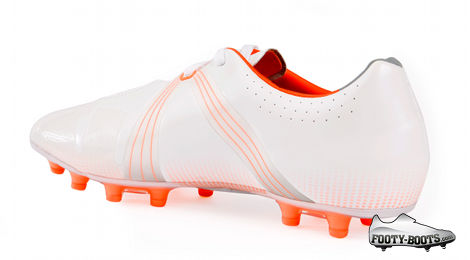 The Umbro GT Pro sports the things that we have come to expect from a lightweight football boot; a Teijin Microfibre upper, integrated heel counter and low profile design.

What it also brings to the party is a TPU control zone in the forefoot, which is designed to increase surface area on the ball when striking and make it easier to control the ball at high speed. 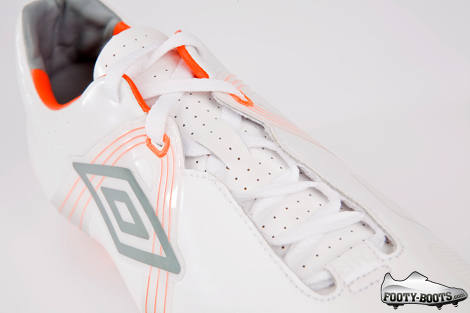 Umbro have also brought the A-Frame technology from the Speciali along, which got the thumbs up from Footy-Boots last year during testing. The idea is the A-Frame integrated with the lacing system, to pull the boot tight around the midfoot – this in turn helps lock the heel into place and minimise blistering.

Umbro also claim that the specially placed perforations enhance overall comfort in the football boot, and also assist in ventilation and weight-reduction. 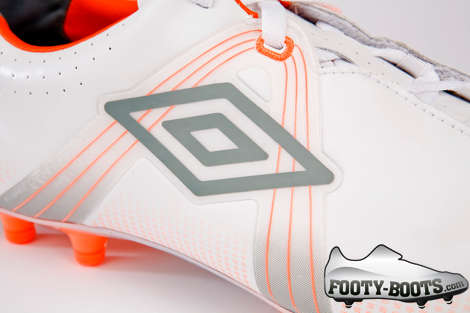 Obviously one of the things that Umbro have to consider when developing the Umbro GT Pro is weight, and at 236g, it’s not a bad effort – in fact; it puts it in the same ballpark as the Mercurial Vapor VI.

At only £85 for the top-spec Umbro GT Pro, this is the most economical boot to come out in a long, long time.

Expect to see this boot in action at the start of the new season, with it’s release date hitting in Mid-August. 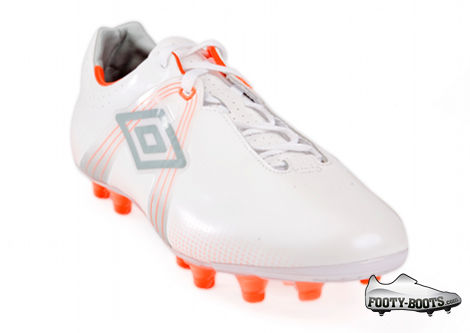 UMBRO GT PRO WHITE/ SILVER /ORANGE, 9.0 out of 10 based on 55 ratings https://www.footy-boots.com/wp-content/uploads/2010/07/Umbro-Gt-Pro-football-boots-white-silver-orange.jpg