After a limited initial release, the Umbro Geometra II is ready to take to pitches the world over as part of Umbro’s Black / Lava Pink ‘pack’ of boots for the new season.

Making a splash in several countries around the world, the Geometra II is set to be included by Umbro as very much a part of their line up for the 2013-14 campaign. 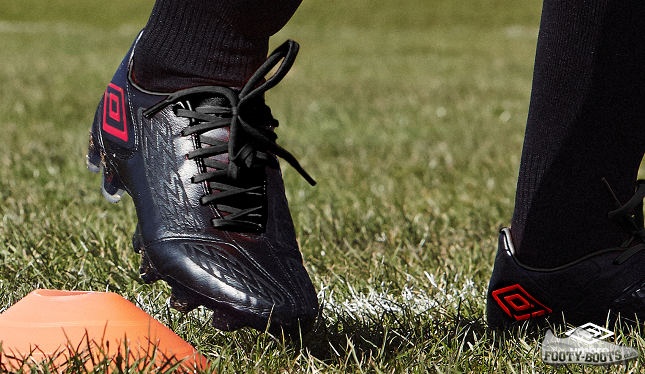 In terms of player representation for the Geometra II, Umbro have been swooping for academy-level players (a tactic that has paid off as future stars like Andre Wisdom work their way into the first team) and are looking to make some waves over the coming months.

But one of the first players to wear this colourway, and arguably most prestigiously, will be England Women’s Rachel Yankey. The all-time leading England cap record holder will be set to wear the Geometra II as the Lionesses take on the continent’s best at the European Championships this summer.

Built around the needs of the visionary player, the Umbro Geometra II’s concept is simple: enhance the boot to help control the ball.

Starting with the lacing system, the deep, off-centre laces create a huge surface area of full-grain leather for enhanced contact on the ball.

In a masterstroke by the Umbro design team, the laces pull the A-Frame cradle stug to the instep, where specialised passing zones offer supreme control on every through-ball as well as a snug, secure fit.

Across the rest of the boot, the zog-zag patterns you see are re-ground rubber treads for enhanced grip, control and spin – allowing you to dictate every pass and touch.

All in all, a smart boot from Umbro on an even smarter colourway.

But we want to know what you think, so click your scores into the boot-o-meter, below!

UMBRO GEOMETRA II’S BLACK / LAVA PINK UPDATE, 9.2 out of 10 based on 23 ratings https://www.footy-boots.com/wp-content/uploads/2013/07/umbro-geometra-ii-black-lava-pink.jpg

Written By
Kyle Elliot
More from Kyle Elliot
Nike release the reinforcements for the charge-leading Elastico Superfly. Are the supporting...
Read More