After a trifecta of new Speciali colourways, Umbro’s deluge of new looks for their boots continues ahead of the weekend with two nicely-opposing updates for the Umbro Geometra II.

Having been pretty quiet with colourways for their control-focused boot, Umbro’s two new editions will be warmly-welcomed by fans who like the sound of a boot that boosts your natural touch on the ball with a whole host of technology.

Kicking things off is the White / Blue version that looks super-clean. Sticking with a two-colour pallet disguises the control-enhancing elements throughout the boot, but the pop of that icey blue makes sure they still have bags of visual appeal.

Being made of natural K-Leather, too, the White / Blue Umbro Geometra’s upper has never looked better than in uninterrupted white that continues down into the sole. 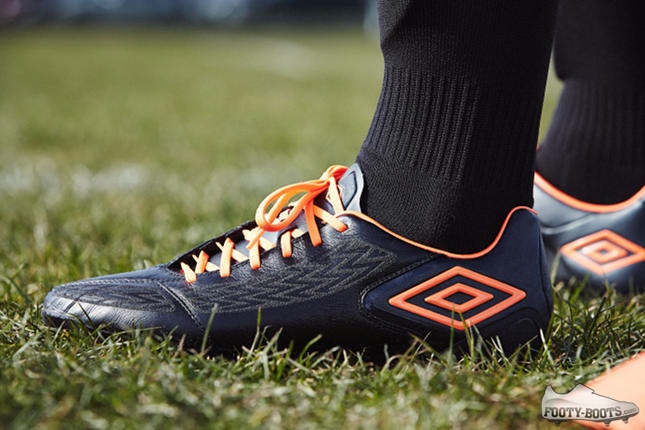 Tying in with Umbro’s statement colourways for Spring and Summer 2014, the Geometra II also gets a Black / Orange update that matches the bi-tonal charm of the White / Blue model despite the opposing colours

Black leather always looks the business and the added orange pop adds a modern edge worthy of a boot brimming with features.

The Geometra II is based around being the ultimate platform with which to pass and control the ball. The K-Leather upper is soft and supple enough to bring the ball under your spell, whilst an embossed rubber print comes alive in wet weather for improved control and swerve with touches and shots.

A side-offset lacing system creates a huge instep area to play the ball, whilst an integrated A-Frame cradle works with the lacing system and soleplate to pull the boot flush, whilst HF-Memory Foam backing makes sure there’s no unwanted pressure.

Thoughts on these two colourways?

Get ’em in the comments, below!