What a week it’s been for spotting upcoming boots! The international break and the training around it have proven unprecedented for sneaking glimpses of potential up-coming boots. 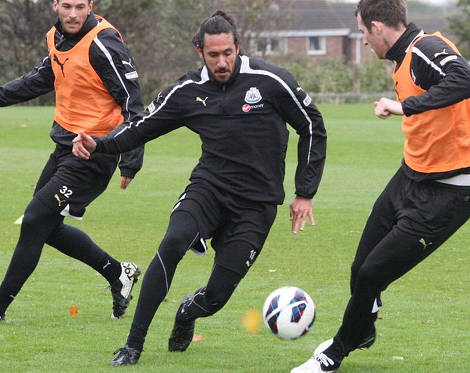 If all the spots we’ve had ' over the last seven days are true, then we’ve already seen the likes of the new adiZero, Puma King SL, the return of the Nike GS and a whole new silo from adidas in testing.

And now, it looks like Umbro are set to get in on the act!

Newcastle United Jonas Gutierrez was spotted in a rather damp training session breaking in a pair of mysterious blacked-out football boots, and our friends at Umbro have hinted that these might be a new development of their stylish Geometra boots which could be seen on pitch very soon. 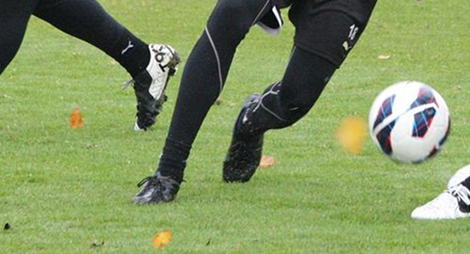 The Geometra has been a faithful servant of Umbro players for almost a year and a half now, having been worn at some point or another by Joe Hart, Gary Cahill, Pepe, Jordan Henderson, Gael Clichy and – of course – Gutierrez himself.

However, these are trying times for Umbro who are in the process of being sold by Nike. Having already seen many of their deals with players and teams being absorbed by other contracts, we’d wager a hot new release could be just the tonic for the Double Diamond.

Anyone that reads Footy-Boots.com on the regular knows that we really rate the Geometra as one of the best boots Umbro have ever dreamt up, so an all-new version is definitely something we’d look forward to. 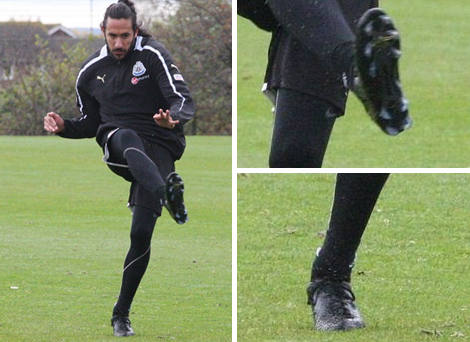 Given the bad conditions, there’s not a lot we can make out in terms of detail on these photos, but one thing that does stand out is the soleplate.

Reminding us of the ‘Tiger Claw’ configuration on the Supersonic Wave range from Mizuno, those translucent studs really stand out! Either Umbro are going for something drastically different to the Geometra 1’s squash-shoe inspired sole or Jonas is training in a custom sole.

Of course, a third option is that these aren’t Umbro boots at all – but that distinctive soleplate looks like nothing on the market at the moment, so it would be difficult to say. Though it could well be the same Warrior boot we’ve seen Gary Hooper and Brendan Rogers playing in recently…

What would you expect from a new Geometra release from Umbro?