Umbro prepare their assault on the new season with a whole host of new colourways, including this stunning new Umbro Geometra – Black/White/Vivid Blue! 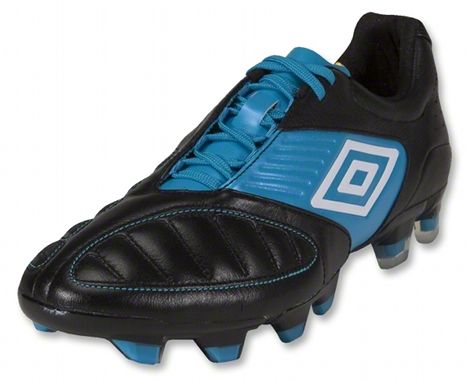 Steadily making ground on the so-called ‘big three’ football boots brands, Nike-owned Umbro brought something new to the party with the control-focused Geometra Pro, inspired by some of the ideas and thinking behind cleats like the adidas adiPower Predator and OG of the control boots world, the CTR360.

With key-wearer Jordan Henderson having been snapped up by Liverpool, Umbro are hoping that this investment in young, English talent will pay dividends for them this years (much like Liverpool, actually) and with players like Steven Gerrard, Charlie Adam and Raul Meireles to play with in the middle of the park there’s a good chance Henderson could prove to be something special.

Speaking of potential stars for next season, there’s a good chance that this' Umbro Geometra – Black/White/Vivid Blue will leave a lasting impression of the world of football boots as it’s arguably the best of the three Geometra colourways to date!

The choice of Vivid Blue over navy or sky really distinguishes the' Umbro Geometra – Black/White/Vivid Blue from many other football boots on the pitch at the moment, and contrasts very nicely to the black upper.

Speaking of which, we love the way this dark colour shows off the texture of the premium K-Leather Umbro use on these football boots and demonstrates the gritty texture of the control-zone over the big toe.

Umbro have – as with the other two Geometra Pro models'  – opted to keep a fourth ‘pop’ colour for the lining of the boot and the 360-stud under the ball of the foot, keeping the boot from drifting into ‘too-dark’ territory, whilst White Umbro branding and flashes of vivid blue stitching in the upper help to keep things interesting.

What do you think to the Umbro Geometra – Black/White/Vivid Blue?

Written By
Kyle Elliot
More from Kyle Elliot
At a stunning 171g, is the Puma King SL the ultimate lightweight-meets-heritage...
Read More