After the June reveal of the new Umbro Geometra, Umbro are readying the release of two brand new colourways for their new control football boots – including this unusual Silver/Yellow/Black version! 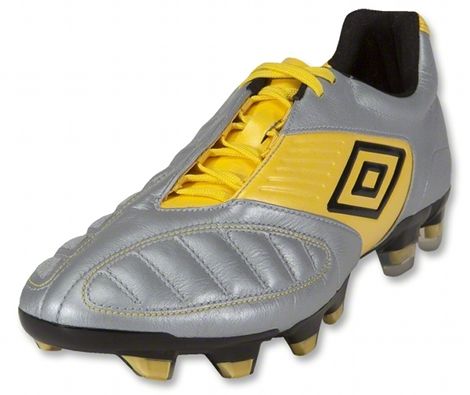 In a colourscheme that you rarely see (though strikingly close to the new GT Pro colourway) the new Umbro Geometra – Silver/Yellow/Black will definitely bring a unique look to Umbro’s new midfielder-focused football boots when they release in August.

Whilst we see plenty of Silver football boots here at Footy-Boots.com, we rarely see any chrome-coloured-cleats combined with yellow and black. Whilst we’re sure that this new' Umbro Geometra – Silver/Yellow/Black will split opinion, we reckon the metallic silver is definitely a good choice by Umbro in a retro-cool sort of way.

Umbro have also opted to keep their CTR360-esque 360-degree stud on the sole a contrast colour to the rest of the boot – in this case red – which really highlights the use of this technology, which ,according to Umbro, was inspired by squash shoes .

The sole’s trim employs a black plastic to tie the rest of the uppers colours to the bottom of the boot – which is definitely a smart move by Umbro’s design guys as it breaks up the two main colours to make these football boots a little easier on the eye.

All in all, we think it’s another strong showing from Umbro and a great addition to the' Umbro Geometra line, especially for those players who are looking for something a little different in their football boots.

As for the Geometra itself, we’ve seen a number of players make the switch to Umbro’s latest football boots in various summer tournaments and pre-season friendlies – so expect to see this colourway on many professionals as they start the new season!