After knocking several pairs of socks clean off with the new UX1, Umbro are completing their World Cup lineup of football boots just in time with a striking new take on the GeoFLARE.

Decked out in camo with bright colours aplenty, Umbro are definitely looking to blindside people with this eye-searing new design that’s sure to remind everyone that they’re back in the game. 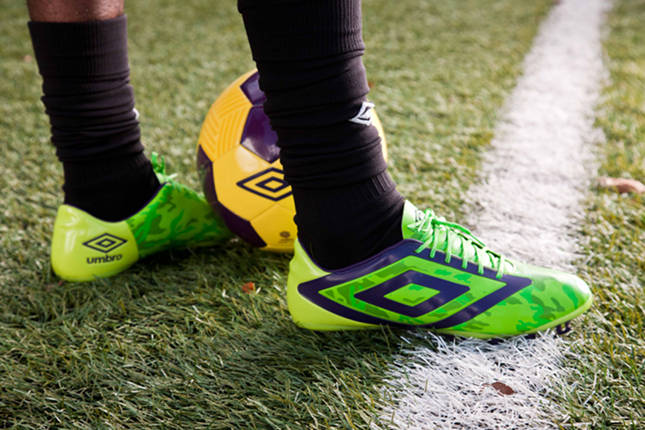 Officially the GeoFLARE is Green Gecko Camo/Blackerry Cordial/Safety Yellow, but that definitely doesn’t tell the full story of the aesthetics on these football boots.

The all-over camo print will likely have Balotelli contemplating whether Puma were the right choice, but it also gives Umbro a chance to experiment with two-tone colour palettes and colour clashes to help give them maximum visibility.

Both the last GeoFLARE and it’s spiritual predecessor, the GT Pro, were famed for making impressively large use of the Umbro logo – with each new model raising the stakes for having the largest Double-Diamond motif featured on an Umbro product.

Thankfully, that gambit is still going on in Manchester, as the logo now dominates the profile of the Umbro GeoFLARE in Blackberry Cordial in an unmissable way.

How’s that for brand visibility?

The detail on the Umbro GeoFLARE II is well worth highlighting, too. Almost lost in the excess of the graphics is the new textured upper.

Not only do these add grip and control on the place of the rubberised pads on the last GeoFLARE, but Footy-Boots.com readers over the age of 25 might also recognise the pattern used as being the same as the one used on Umbro team kits at Italia ’90.

There’s no doubt that the Umbro GeoFLARE has undergone some drastic outward changes, but under the hood, there’s a lot of familiar technology.

Upper wise, the same microfibre synthetic upper is employed for comfort and touch in a wide range of conditions.

The soleplate also uses the same FG traction as the GT Pro II and original GeoFLARE, with bladed studs positioned around an engineered flex point in the toes for a distinct sense of grip when pushing off, and stability when striking.

A glass fibre zone under the toes also ensures the boot retains shape and offers proper energy return with every movement of the foot. 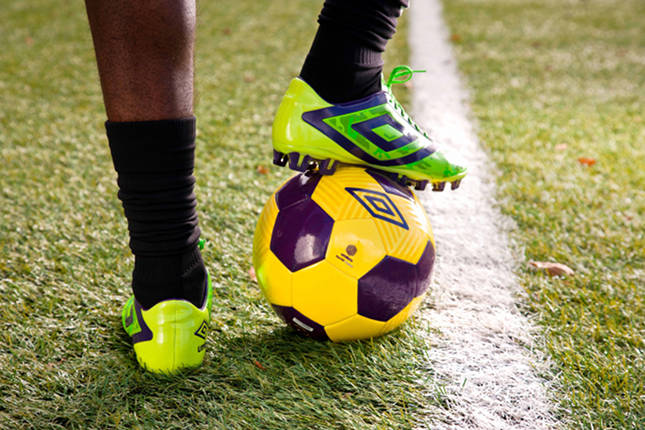 The lacing system, however, does get a minor refresh – now more centred, Umbro are hoping to provide the best of both worlds; a slight offset and clean instep provide optimal contact when passing, striking and crossing, but the laces are still central enough to provide lockdown fit and support.

Umbro continue to make an impact on the boot market and yes, they’ll even have a pair at the World Cup; Mauricio Pinilla of Chile has been wearing them in the warm-up games and will certainly have no problem standing out in these colourful creations.

Thoughts on the Umbro GeoFLARE? You know what to do…

Umbro Update GeoFLARE in Time for World Cup, 7.9 out of 10 based on 19 ratings https://www.footy-boots.com/wp-content/uploads/2014/06/Umbro-Geo-Flare-II.jpg