5-a-side and other small sided football has become the most popular and fastest growing forms of football.

If you’re one of the many who takes part in the all action, non stop game, you’ll want to know what makes The Ultimate 5-a-Side Team.

Ahead of the Gillette Flexball Cup, we’ve hooked up with Powerleague’s CEO and Gillette ambassador and England goalkeeper Joe Hart to get the best tips for the Ultimate 5-A-Side Team.

The most important player on the pitch. Put a goalkeeper with a safe pair of hands and a brave heart between the sticks and you’re already half way there.

Powerleague’s CEO – Rupert Campbell believes it’s often the crucial difference: “I see it every week that the quality of your keeper separates the promising teams from the great ones. You can put the best players in the world on the pitch but if you have someone useless in goal, you’ll never win a game, let alone a cup.”

However, beware the keeper with aspirations beyond their semi-circle. The best goalkeepers always entertain dreams of influencing outfield play; a fact backed up by Joe Hart: “there’s no way I would want to play in goal. I just want to score goals”.

This player is a big believer in the umbrella formation: three attackers at the top with The Anchor sitting at the back holding the team together.

The Anchor comes in two forms: enforcer or orchestrator. The enforcer is the angry man of the team, hammering into anyone who dares to try and break towards his goal. The orchestrator is the pivot; giving and receiving the ball as often as possible and claiming vague responsibility for every goal scored.

Rupert Campbell believes The Anchor is the most important outfield player: “This player can normally be found telling people he could have made it if it wasn’t for his ‘dodgy knee’.

“The best anchors have the ability to completely dominate the game from the back and make it look all too easy. They’re also normally the real leader of the team, whether they have the armband or not.” 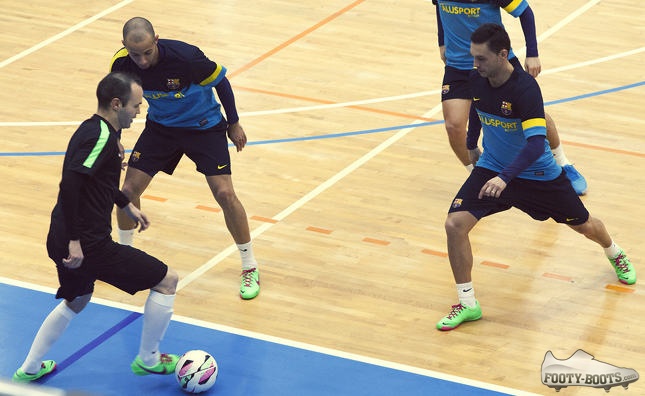 These are the two players who cause chaos. Sharp with or without the ball, the Gamebreakers put in more work than anyone else and can be found either side of the pitch racing up and down all night long.

“These are the players who we always keep an eye on for a bit of entertainment. They’ll be the ones trying ridiculous tricks and running the opposition off their feet.” added Rupert. “The difference between good teams and cup winning teams though is getting them to defend. Fail in doing that and you’ll always leak goals.”

Every team needs at least one player who can hit the net from all over the pitch. Long range, tap-ins, left foot, right foot and (if it was allowed) headers too; it won’t always be spectacular but the Sharpshooter can score them all.

According to Joe Hart, the best tactic in 5-a-side is to “Just shoot. The pitch isn’t that big so just keep shooting!” and Rupert agrees:“If you have a real finisher in your team then it’s invaluable. The game is so fast-paced that you have to be clinical in tucking away your chances and if you do that then you can build an imposing lead quite quickly and really put the pressure on the opposition”

So that’s what makes the Ultimate 5-A-Side team, do you have any further tips? Here’s a few tips from Joe Hart.

The Gillette Flexball Cup; a national 5-a-side football tournament to win a once-in-a-lifetime trip to watch El Clasico, is still open for entries at powerleague.co.uk

Written By
Ramsay
More from Ramsay
If you're looking to add an everyday trainer to your gift list...
Read More