Under Armour cap off their debut selection of Spurs kits with the reveal of the new Tottenham Hotspur Third Shirt 2012/13.

As Manchester City did earlier in the year, Spurs and Under Armour have partnered with the guys at EA Sports to give their new uniforms a virtual debut in the upcoming footy sim FIFA 13.

Half black and half silver with a yellow trim, the Tottenham Hotspur Third Shirt 2012/13 is just the right combination of eye-catching and understated, so hats off to the design team at UA for this shirt!

A classic crew-neck collar gives the whole jersey a clean, athletic look which offsets the unorthodox design and colourscheme. 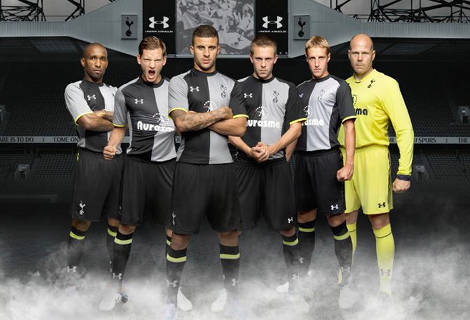 If we had to give one criticism of the Tottenham Hotspur Third Shirt 2012/13 it would have to be that – with the home kit being White and the Away being dark Navy Blue – are Grey and Black the best alternatives? Given that the likes of Puma, Umbro, Pony and Kappa have found Purple, Gold, Yellow and even Brown as good options for Spurs, it’s certainly interesting to see Under Armour’s choice of colours.

Spurs fans have had an interesting start to the season to say the least. The AvB regime is still in it’s infancy, but is still without a win in the Premier League. The loss of Luka Modric to Real Madrid will have hurt the White Hart Lane faithful, but the reacquisition of Emmanuel Adebayor provides the Lilywhites with a proven goalscorer.

Speaking of Adebayor, the Togolese international joins Jermaine Defoe and Gareth Bale to make a fearsome trio of adidas F50 adiZero wearers in the Spurs attack – and we’d humbly suggest the above Black / Metallic Silver / Lab Lime version of their preferred football boots as the perfect compliment to the Tottenham Hotspur Third Shirt 2012/13.

What do you think the Tottenham’s new 3rd kit?

Written By
Kyle Elliot
More from Kyle Elliot
Find out why Ronaldo is Nike's Mr. Consistent when it comes to...
Read More