It’s no secret – life’s tough when you’re a keeper. Since the dawn of the modern game, the Veterans of the Onion bag have been saddled with huge pressure, the hardest job on the pitch and the expectation that they’re ‘a bit mental’.

What really doesn’t help is the fact that the whole industry is geared against them!

Look at the advertising! ‘Kill the Nil’ says the T90 Tracer, ‘Be the Weapon’ says the Laser III. There’s no ‘Put the ball on your team-mates head from the 6-yard-box’, is there? Probably because it sounds naff.

But one company is guilty of crimes against goalkeepers that we refuse to let go unnoticed any longer! Behold, our top 5 Worst Umbro Goalie Kits! 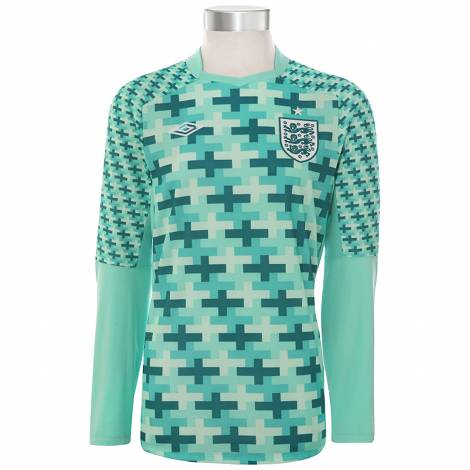 The kit that inspired this whole article, this Peter Saville-designed oddity has had an uproarious reaction from the press – and with good reason.

First of all, the print. We see what Umbro are going for here, with the cross of St. George being replicated all over the front – but the colours are just awful. They look more like something out of a gift box of bathroom soaps, rather than something that belongs on a football pitch.

But the thing that really gets us is the sleeves. Why does the print stop half-way down the arms? Did they head designer say “You aren’t really going to cover the whole shirt in that print are you?”. Shocking.

Modelled here by a young Edwin Van Der Sar, there’s a lot to potentially like about this kit. At it’s base value it’s green and gold – two classic ‘keeper colours on a round-necked top.

Had Umbro quit whilst they were ahead, it’s safe to say that Ajax would have avoided being on this list – but they didn’t, so they are.

Instead, there’s half a chequered flag on the left, some rogue diamonds on the midriff and some asymmetrical stripes on the right shoulder – it looks like an impressionist painting of an Formula 1 pile-up.

Like the Ajax kit – maybe if we understood what the design was getting at, or what it was representative of, we could begin to appreciate it.

Instead, poor Tim Flowers looks like he’s covered in slabs of sponge, with an art-deco monster (whose face is the Dutch flag) snaking in over his shoulder.

Which, coincidentally, is what I see if I eat too much cheese before bed.

This is the kit that most people vote as one of the worst atrocity inflicted upon a goalkeeper – the infamous ‘Refreshers Kit’.

Worn by David Seaman during the Euro 1996 tournament, it quickly gained notoriety for looking utterly naff.

Bold red, lime, lemon and purple in colour and utilising the single worst neck ever put on a sporting garment – it was actually the cause of an outbreak of migraines in 1996, just from people looking at it – so it’s hard to believe we think there’s one worse…

It’s one thing for a kit to be badly designed. It’s another for it to be humiliating to the keeper wearing it. But for a kit to actually make people feel embarrassed for, not just the keeper, but humanity itself for allowing such a thing to exist? That’s powerful.

From the big, unnecessary collar to the fact that the whole shirt looks like the opening credits from ‘Saved by the Bell’ there is literally nothing to like about it – the only saving grace for poor Neville Southall here is that the shorts aren’t made of live bees.

So, that’s our conclusive evidence that Umbro likes to dress goalkeepers like planks for their own, maniacal amusement.

If you have any more kits you think deserve to be on our list – let us know in the comments!

Written By
Kyle Elliot
More from Kyle Elliot
Feeling an Arctic chill in the air today? It's probably these ice-cool...
Read More