We do like a good list at Footy Boots. And what better way to celebrate the release of the Manchester United away kit for the new season than by putting together the 1 to 10 most popular shirts of the summer.

We’ve trawled through the records at the Footy Boots Shop and can now reveal which shirts have made it to our exclusive countdown. 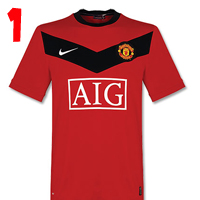 The release of this shirt was a cloak and dagger affair masterfully handled by the club and Nike.

The shirt takes it’s inspiration from the teams that first played at Old Trafford as the ground celebrates its centenary.

Some have argued that it resembles a previous Mexico World Cup shirt – but you can’t dispute the figures. It’s the number one best seller – FACT. 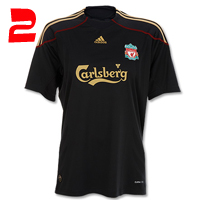 Hot on the heels of Manchester United come Liverpool and their away shirt in black and gold, or to use the official description, phantom and gold trim.

Most Liverpool fans agreed that its a vast improvement on the kit used in season 2008 / 2009, hence its massive popularity. 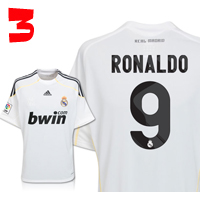 You just can’t keep keep Cristiano Ronaldo out of the news.

He goes to Madrid for £80 million, and then 80,000 fans turn up at the Bernabeu to see him paraded by the club.

And amazingly, its an individual players shirt that takes the number 3 spot. 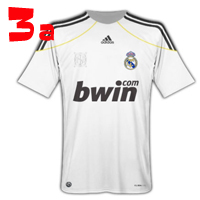 So with CR selling shirts like hot cakes, or should that now be hot tapas, it only seemed fair to make the number 3 spot a shared position with the Real Madrid club.

Mind you, they’ll need to shift a few more of these to claw back the millions they’ve spent on the likes of Ronaldo, Kaka and Benzema. 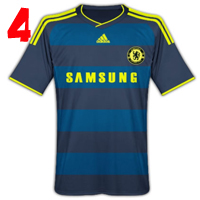 Chelsea’s home shirt for the coming campaign got something of a mixed reaction but fans have gone potty for the away version.

No wonder really as it’s got all the makings of a classic.

The dark navy and neon yellow affair doesn’t feature the home shirts chest panelling and is miles better for it. 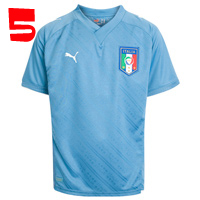 Not only did PUMA do a great job with this shirt, but also with the entire King XL Italia range.

A shame then that Italy were about as useful at the Confederations Cup as Kate Moss at an ‘eat all you can buffet’.

Still, you can’t argue with style and this shirt has bags of it. 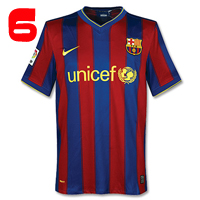 Perhaps a surprisingly lowly position for a club that won a unique treble last year.

Mind you, nothing much changes with the Barca home shirt and why should it, being an iconic look in the world of football.

The shirt sports the unicef charity logo again but with all the superstars now gathered in Madrid, will it be Barca who need a helping hand? 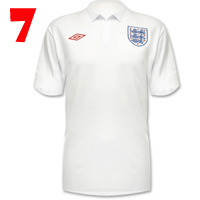 Fair play to Umbro. Their marketing campaign ahead of this shirt’s release was spot on and that’s refelcted in a top 10 position.

A world away from some of the more recent (and some might say tacky) England shirts, this design exudes thought, skill and tons of traditional tailoring ability.

Each England player has his own fitted version, but the design even lends itself favourably to Joe Public.
Order the England Home Shirt 2009/11 – Here. 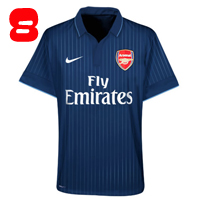 Not the first time that the Gunners have chosen blue for an away kit. They first time they did so was in 1918 since when, it’s featured a total of 8 times.

Preferred by many Arsenal fans to next season’s home kit.

It even got a few votes of support from Man Utd supporters which is really saying something.

Just shows you that pinstripes don’t have to be confined to the boardroom. 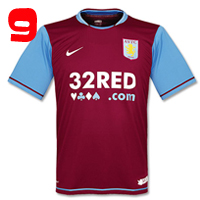 Do what, we here you cry. Aston Villa? What about Everton, Spurs or Man City? Well, what about them?

The figures don’t lie and Villa are worthy of their number 9 slot.

They’ve got a top manager in Martin O’Neill, they’ve done the business on the pitch and even their most ardent critics agree that this is their best shirt for years. 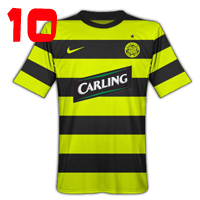 A cracking shirt but will it be seen beyond the confines of the Scottish border after the club’s defeat by Dynamo Moscow in Champions League qualifying? The smart money says not.

Already affectionately known in the trade as the ‘bumble-bee!

So there you have it. The best top 10 list we’ve come up with on Footy Boots since…..well, since the last one we did.

By the way, which shirt do you prefer from these recent releases? Let us know by leaving a comment below.

Written By
Felipe
More from Felipe
Lotto posts it's results for 2007 - and they're looking good.
Read More