At the grand re-opening of the Manchester Football Store, we managed to get a little bit of time with Chart-topping grime artist Tinchy Stryder – who was the event’s referee.

In what was arguably the least likely interview of the night, see what happened when Footy-Boots.com went head to head with Tinchy on clubs, players, football boots and which of his hip-hop mates are the best at football! 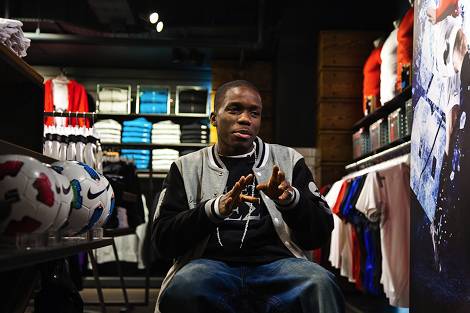 FB: So, Tinchy for all our readers that don’t know which team do you support, week-in, week-out?

FB: As a Red, what’s it like being here with 3 Old Trafford Regulars?

TS: It’s cool – I’ve met Rio a few times before and we’re cool people, and Gibson. But ‘cos I’m supporter it’s funny, you support them on a weekend and then you get the chance to meet them and they’re cool people! We get along I’m lucky to be here mixing with them!

It’s not the first time you’ve knocked about a pro Footballer is it? You spent the summer with Rio’s brother, Anton out in South Africa – how was that?

Me and Anton really got along, he’s a cool guy! We relate to the same things on a lot of stuff, you know like music – there’s a few things we share the same interests in. So since we got back we stayed in touch and he’s someone who I’ve always felt had a couple of problems (with injuries) – but he’s focused.

We spent a lot of time together and Anton’s someone who’s got his head screwed on, definitely. 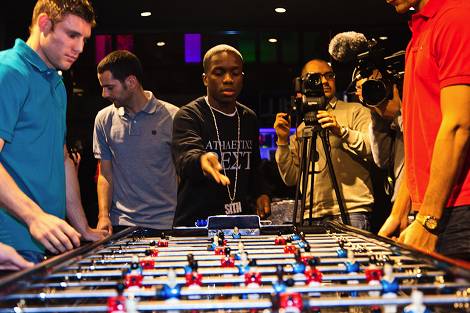 It’s changed recently. When I play football I play striker, so my heart always goes out to the attacking players – and right now it’s gotta be Nani.

As someone who loves his attacking football, who outside of Old Trafford do you reckon’s good?

Outside of Man United it’s down to Ronaldo man, I know he left us but, you know as a Man U fan I got to see first hand how good he is.

I always find it hard to pick out of him and Messi – I guess it comes down to having seen Ronaldo more. The first time I got to go to Old Trafford was against Tottenham. We were losing 0-2 and came back to win 5-2. So from that day I’ll always remember watching him and rating him.

On your new album you collaborate with the best of Britsh Hip-Hop with guys like Devlin, Giggs & Tinie Tempah – with all the guests on Third Strike, do you think you could start a football team, and who’d play where?

I don’t know how good the other guys are at football – but all I do know is that I’d be the striker and we’d be alright – I’d get us the goals!

You don’t fancy Professor Green as a mouthy centre-mid, then? 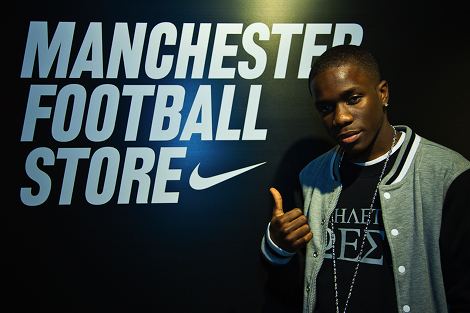 With touring being so hectic – do you still get to play often?

I try man, I try. I used to play every Sunday, me and Ruff Sqwads – my'  peoples – always used to get a game going on Sunday, but lately it’s been so hard with the schedule being like it is.

Football recently, for me, it’s been all 5-a-side – but that’s tiring man! I forgot how much effort you have to put in!

And what football boots do you wear when you do get to play?

Last ones I got were the Tiempo Legend‘s but I like to play in my Total 90 Laser II – I got some yellow ones, and you know you can only wear yellow football boots if you are a standout footballer!!

Representing the old school T90’s! Do you have any other favourite retro football boots?

Yeah; when I was growing up I used to love watching Ronaldo – as in the Brazilian Ronaldo – and he got them R9’s! You know, the Silver Mercurials. I wanted them so bad, and one Christmas I finally got them – that was more than cool!

Tinchy Stryder was speaking at the official opening of Nike˘ first football-only store in the world Ĺ› the new Nike store on Manchester˘ Market Street.'  The Nike Football Store has been expanded over two floors and is dedicated purely to football, football services and experiences to give fans the very best of Nike. For more information, visit www.nikefootball.com