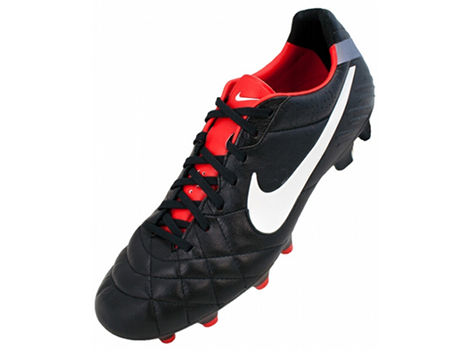 Now that the CTR360 has finally had an update, that leaves the Tiempo IV as the ‘oldest’ boot in the Nike stable – somewhat befitting given that it’s also the oldest silo in Nike football history, having been in action since the World Cup in 1994.

But that’s not to say it’s dated! As Nike reveal the  Nike Tiempo Legend IV – Black / White / Challenge Red, we can’t help but think the Tiempos are looking better than ever!

Despite not being drastically different to the Black/Max Orange launch colourway, the  Nike Tiempo Legend IV – Black / White / Challenge Red definitely brings a whole new look to the range.

We’ve already seen it in action on the feet of several Manchester United stars, and it looks a great match for the kit – as we imagine it will be for other players at AC Milan, Liverpool and more.

Despite it’s lack of flash, the  Nike Tiempo Legend IV has accumulated a vast amount of admirers, with the recent European Championships being flooded with top class talent (Pique, Puyol and Pirlo to name but a few) wearing this heritage-inspired cleats.

When it comes to technology, there’s not a lot to boast. The forefoot is super-soft K-leather with strategically-placed stitching to prevent over-stretching, whilst the midfoot and heel are Nike’s KangaLite synthetic, which provides a more sturdy, waterproof base for this high-strain section of the boot.