We’ve known that it’s been coming for months now, but finally Nike have revealed the all-new Nike Tiempo Legend IV! Combining Natural K leather and synthetic Kangalite, see why Nike Tiempo Legend IV could be the most revolutionary entry to Nike’s oldest range of football boots since 1994! 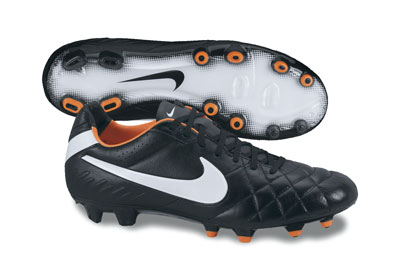 The new Nike Tiempo Legend IV retains much of the features that have made the Tiempo name one of the most enduring in the world of football boots , and tweaks them to take advantage of new modern technologies and meet the demands of Championship athletes.

The shape and fit of the boot will still be styled on the classic Tiempo last, with a central lacing system for a secure fit – but does away with the Tiempo Tonngue which has endured for over 17 years; an undoubtedly controversial move!

A main feature of the Nike Tiempo Legend IV is the introduction of Nike’s revolutionary KangaLite synthetic K-Leather on to the standard version of these classic football boots (as opposed to the Elite model launched this time last year, which was always KangaLite).

Whilst not dominating the whole boot, the KangaLite is used in the midfoot and heel to offer additional support to these high-strain areas of the foot, whilst also improving the overall water retention of the Nike Tiempo Legend IV, given that Nike’s synthetic absorbs 20% less water on wet pitches that natural leather.

However, Nike have been clever enough to keep the classic touch and feel of K-Leather where it counts the most; on the forefoot of the Nike Tiempo Legend IV.

The new quilted stitching pattern (which fans may well recognise from the Ronaldinho Dois) allows a greater level of flex in all directions of these football boots, increasing comfort and offering a fantastic touch on the ball.

The rest of the boot will feel familiar to fans of the Tiempo line, with the Nike Tiempo Legend IV offering a a moulded sockliner, arch support and internal heel counter in the midsole and a dual-density TPU outsole that uses traditional rounded studs with blades to provide maximum ground penetration and pressure distribution.

The Nike Tiempo Legend IV is set to release on July 1st 2011, with two colourways available at launch – Black/White/Total Orange and White/Silver/Royal Blue.

“A solid silo update from Nike with some features that really fit the theme of these ‘touch’ football boots, but it will be very interesting to see how many players opt for these over the Elite versions…”

What do you think of the Nike Tiempo Legend IV?

Written By
Kyle Elliot
More from Kyle Elliot
We bring you another curiosity from the far East with these gorgeous...
Read More