Thierry Henry flew back from a holiday in the USA, to take part in Dennis Bergkamp’s testimonial at Arsenal’s new Emirates Stadium. Henry, who scored in the game, was wearing a pair of Reebok football boots for the first time.

It was thought that he was under contract with Nike until August, when his new 9 million pound contract with Reebok ‘kicked in’. However, playing in his first game at the new Emirates Stadium, Henry was wearing a pair of all white, Reebok football boots. 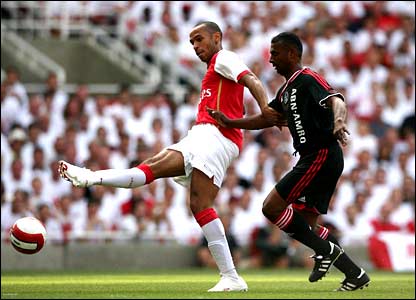 Recent Video – Thierry Henry – Me and My Game

Written By
Felipe
More from Felipe
Another top cast of former pros make an appearance in the latest...
Read More