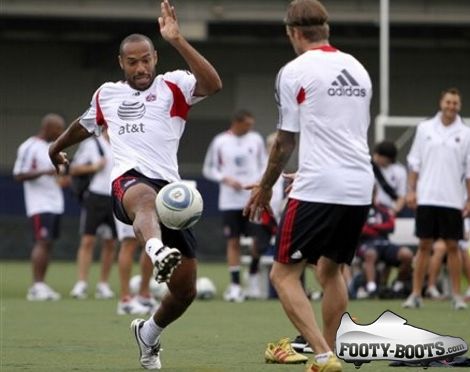 The former Arsenal and Barcelona hit-man spent yesterday warming up for the match-up with Manchester United with other MLS All-Star nominees such as David Beckham and Juan Agudelo – but whilst most people were looking forward to the prospect of Becks and Henry taking on Manchester United together – we were looking at his football boots!

After controversially leaving Nike in 2006, Thierry Henry has been a keen advocate of Reebok’s range of football boots, having developed many of their best-selling ranges alongside them – such as the SprintFit and Instante Pro. 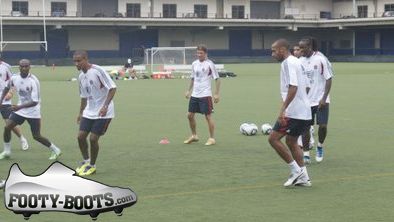 However, it seems that Henry is considering not renewing his agreement with the Bolton-brand as he took to the pitch yesterday he was wearing the White/Black/Gold Puma King Finale!

Thierry Henry left Nike after the 2006 World Cup, with his 5-year Reebok deal officially commencing on August 1st – which means that by this time next week he will be free to wear whatever football boots he chooses.

After playing for over a decade in synthetic speed boots, it’s very interesting to see that the flying Frenchman has opted for Puma’s super-soft leather King Finale for his first choice! 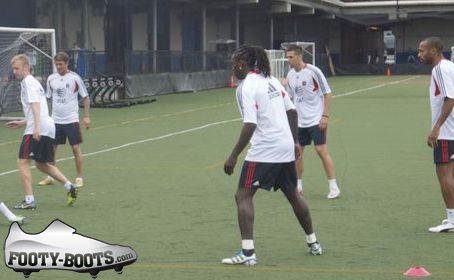 It will be very interesting to see how not only Reebok, but other brands react to this move from Henry.

Reebok have moved further and further away from the world of football boots in the last 12 months, with very few ‘marquee’ names in their roster – letting Henry go to another brand would likely signal either that the brand is going to abandon the football market all together, or will plow the likely-lucrative money previously tied into Henry’s deal into getting another star into their football boots.

Despite being labelled by many as ‘past his best’, Thierry Henry is still the leading scorer in the MLS and chips in with crucial goals for the Red Bulls franchise time and time again – which would likely make him worth a short-term deal with another brand at the very least. 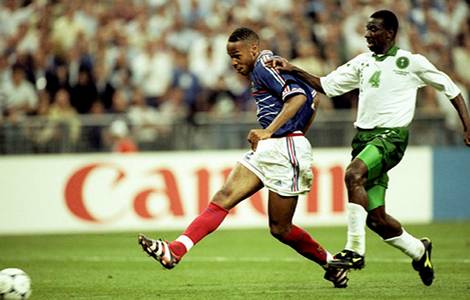 If Puma were to snap up Henry before anyone else, it would make the former French captain the only player we could think of that has been under contract at four different brands, having shot to prominence in adidas Predators in 1998, smashed goalscoring records in Nike Mercurial Vapors until 2006 and won an unprecedented sextuple wearing Reebok with Barcelona in 2009.

What do you think has happened to Reebok?

Is Thierry Henry still worth a brand’s money to wear their football boots?

Written By
Kyle Elliot
More from Kyle Elliot
Cristiano Ronaldo takes preparation for El Clasico to another level in this...
Read More