Wow. The noisy neighbours just got a whole lot noisier! 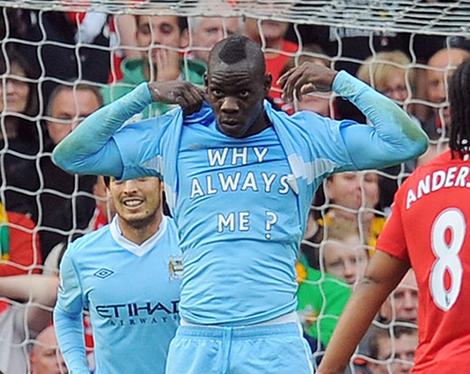 Probably because you set fire to your own house with fireworks, Mario.

On Sunday the watching world was stunned as Manchester City tore their city rivals to shreds at Old Trafford with a breathtaking performance to put themselves five points clear and break a host of records in the process.

In the end, City could have scored even more but for being profligate in front of goal so had to settle for a mere 6-1 triumph. For Alex Ferguson, this was a day he must have never seen coming, but he had the decency to remark afterwards that it was his worst ever day at the office.

He has to address concerns that Rio Ferdinand is in terminal decline and the youngsters who look great when the team in on top leave lots of questions unanswered when placed under concerted pressure by players with the talent to capitalise on their chances. 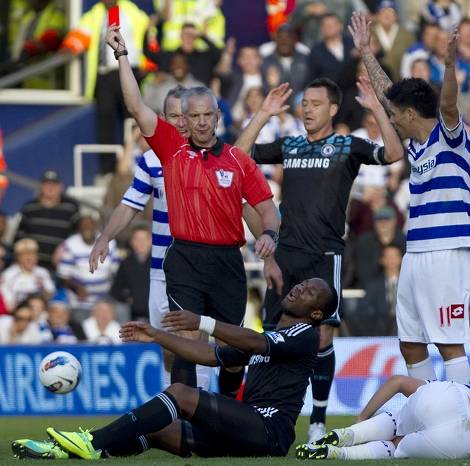 This really is one of those ‘Pictures Worth a Thousand Words’, isn’t it?

Chelsea had the opportunity to leapfrog Manchester United into second place but were undone by David Luiz, the referee, Didier Drogba, the referee again and QPR's determination to cling on to the early lead given them by Heidar Helgusson's penalty. That Chelsea looked eminently capable of getting back on level terms even with nine men will provide some solace, but not much.

At Craven Cottage, Bobby Zamora decided to attempt to kick the coating off the ball instead of placing it into an unguarded net, which was a bizarre choice as it would most likely have been the winner against Everton. Instead, once the ball had been found from the Thames, Tim Howard's resulting goal kick landed with Louis Saha and Everton had won the game. Jack Rodwell compounded Zamora's misery seconds later by adding an improbable third.

Arsenal rested Robin van Persie for their home fixture with Stoke before deciding they actually wanted to win the game. The captain came on, scored twice and probably won't be rested next week. 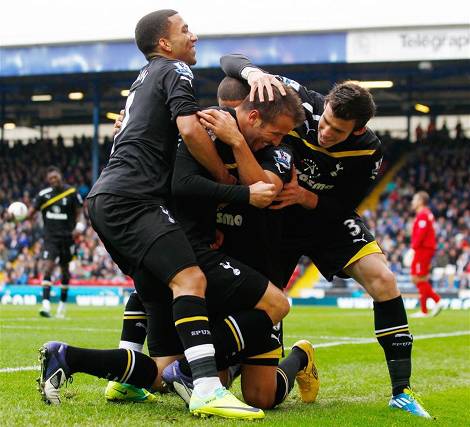 Everyone in the Spurs dressing room has come to fear Aaron Lennon’s overly-aggressive style of ‘hugs’.

Rafael van der Vaart scored two super goals for Spurs at almost-managerless Blackburn. Until yesterday, Spurs were the last team to get tonked at home by Manchester City so perhaps Ferguson should look to their example since ” Harry Redknapp's side have been in commanding form and have the top four in their sights.

Alan Pardew's Newcastle currently occupy that all-important fourth place, and deserve a lot of credit for maintaining their excellent start to the season. The excellent Yohan Cabaye stroked home the decisive goal against Wigan, who fell to their sixth successive defeat in spite of a spirited performance.

The final word should go to Mick McCarthy. With Wolves fans heading for the exits or berating their manager as the home side trailed 2-0 to Swansea, McCarthy's side turned it around to grab an unlikely point thanks in no small part to his substitutions.

He made the very valid point that a game of football lasts 90 minutes plus injury time; quite why fans feel like missing some of the action they have paid so handsomely to watch remains one of football's great mysteries.

Written By
Michael D
More from Michael D
adidas reveal the kit that Bayern Munich will wear as they defend...
Read More