After the lunacy of some of the results across the past few weeks, this weekend saw some sanity return to the Premier League as the favoured teams all picked up points. 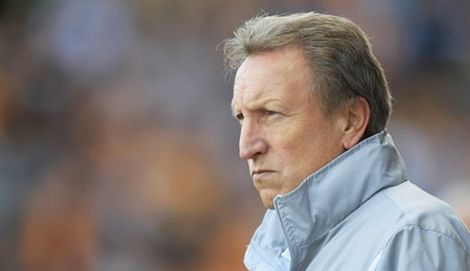 Neil Warnock spent Sunday afternoon demonstrating why he is known as ‘Colin’ to fans of other clubs; QPR’s boss had choice words for the referee and his left back in particular following Rangers’ 1-1 draw with Aston Villa.

Villa defender Alan Hutton’s left arm looked to have twice had a lucky afternoon as penalty appeals were waved away by 4-year-old referee Michael Oliver, but Richard Dunne – having just been announced as man-of-the-match then scored the unluckiest of own goals to cancel out team-mate Barry Bannan’s earlier penalty.

The weekend’s action began on Saturday lunchtime with Manchester City hosting Everton. For once Kun Aguero was unable to find the net but did have a decisive part to play in the game’s crucial opening goal, teeing up sub Mario Balotelli to break the deadlock. Fellow sub James Milner then latched on to David Silva’s super through ball to settle the game. 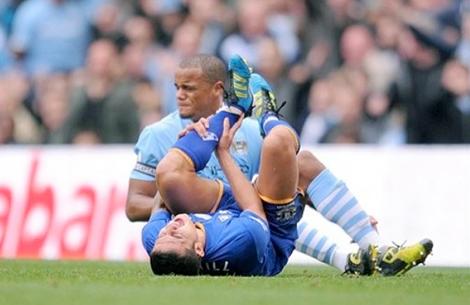 Everton boss David Moyes was left incensed by Vincent Kompany’s decision to ‘do’ Tim Cahill, conveniently ignoring that Cahill to all intents and purposes had set out to do Kompany by lunging at the ball in the first place.

Goal difference is all that settles the Manchester sides at the top now, after Peter Crouch scored his first Stoke goal to cancel out Nani’s brilliant opener at the Britannia Stadium and force Alex Ferguson to settle for a point. As impressive as both sides have been, they only sit three points ahead of Chelsea, so maybe it won’t be a two-horse race, after all.

Andre Villas-Boas’ Stamford Bridge revolution is subtly having an impact – Frank Lampard found himself watching proceedings from the bench – and Fernando Torres appeared to have instantly erased memories of last week’s Rosenthal moment as Chelsea started strongly against Swansea. 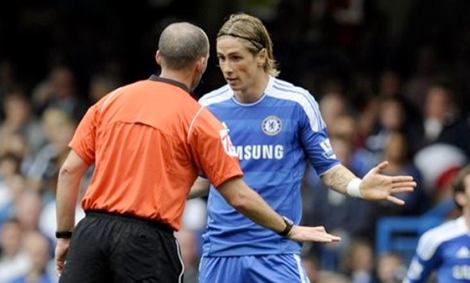 Torres attempts to defend his tackle on Swansea’s Mark Gower. Mike Dean implores him never to try defending anything ever again.

Juan Mata’s delightful pass led to a glimpse of the Torres that we all used to know, and when Ramires added a second following a move that involved the Spain striker, everything seemed to be going well. And then he lunged two-footed at Mark Gower and all his good work was forgotten.

It didn’t affect the outcome – Chelsea ran out 4-1 winners – but just as Torres turns one corner he finds something else to go wrong.

The team most likely to lead the pack chasing fourth sport at this early stage of the season is Spurs, even if they currently sit behind Liverpool. Another confident performance saw them leave Wigan with a 2-1 win thanks to goals from Rafael van der Vaart and Gareth Bale. 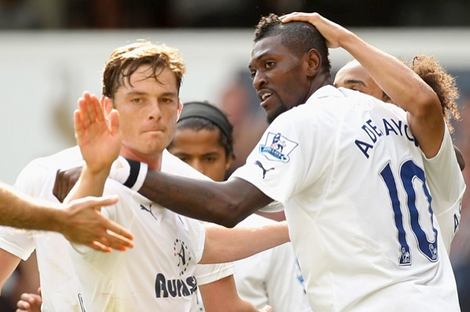 Pictured: Parker and Adebayor happily soak up the plaudits. Not Pictured: the players who actually scored the goals.

With each passing game, the late-in-the-day transfer window singings of Emanuel Adebayor and Scott Parker look like a masterstroke. Harry Redknapp may well be Mr Obvious when it comes to signing players, but these two undoubtedly add quality to Spurs.

Liverpool put their thumping at White Hart Lane behind them with a 2-1 victory over Wolves at Anfield, for whom Roger Johnson didn’t have a great time of it. Pushed in the back in the build-up to the own goal he then scored, he also played Luis Suarez onside for the game’s decisive second goal.

Elsewhere, Arsenal cleared some of the gloom surrounding the club with a comprehensive defeat of freefalling Bolton and Blackburn returned to their normal weekend routine by losing, this time at Newcastle for whom Demba Ba scored a tidy hat-trick, even if Leon Best was doing his best to claim the third. 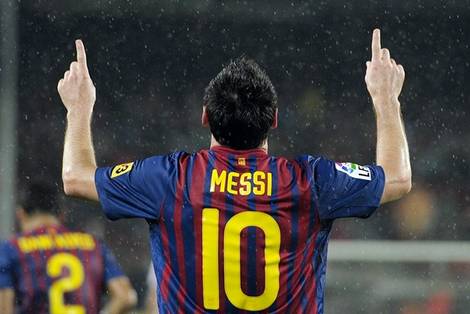 Messi knows who’s really to thank; the hard-working men and women of the Camp Nou floodlight-operation team. This one’s for you, guys.

Meanwhile in La Liga, Messi continued to rob pundits of superlatives as he and Barcelona recovered from a midweek stumble by hammering 5 past Atletico with no reply.

The new-look Atletico side had been deemed one of the biggest challenges Barca would fact in the first leg of the season, but Villa, Messi and an unfortunate goal from Miranda saw the capital city side swept aside.

Cristiano Ronaldo was also on form, bagging a treble of his own to bounce Los Blancos back from an early scare at the hands of Rayo Vallecano.

Despite the persistent threat of two-goal Rayo forward Michu, Ronaldo’s hat-trick, Higuain’s maiden goal in the new Nike T90 Laser IV and one each from Raphael Varane and Karim Benzema saw Real take the total up to 6 and undermine the efforts of their fellow Madridistas.

The real news came after the game, though, as despite an ego-inflating hat-trick, Ronaldo managed not to give one of the cringe-worthy post-match interviews that have become as much a mark of the Portuguese’s game as his step-overs and free-kicks.

Written By
Kyle Elliot
More from Kyle Elliot
The stats reveal that two players in particular could make the difference...
Read More