At this rate, things are going to become predictable and boring. One Manchester team brushes aside a Premiership team which is only competing in the sense that it also starts a game with 11 players, and then the other Manchester team does the same. 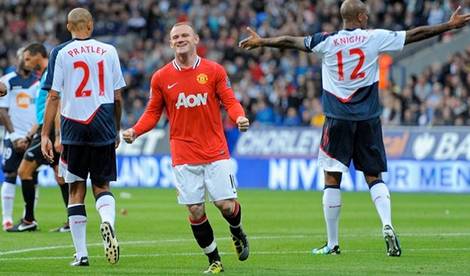 Knight wonders what happened to the Bolton that gave Man City a 3-2 run for their money?

Sergio Aguero’s three finishes at Eastlands (or whatever it is called now) were simply exquisite – the Robbie Fowler skill of being able to pass the ball with perfect placement lives on – while Wayne Rooney’s triple sums up the form the England striker is in.

Chelsea would appear to be playing for third place, and their own supremely talented striker scored his own brilliant goal in a 2-1 triumph at Sunderland – Daniel Sturridge’s clever back-heeled touch demonstrated the kind of confidence substitute Fernando Torres once had. 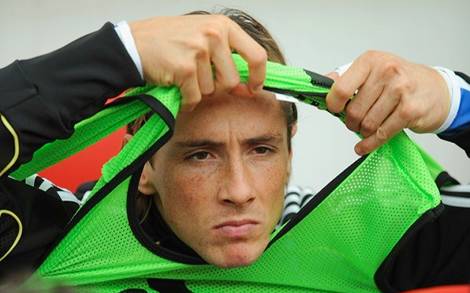 Torres: Better than Balotelli. At putting on training bibs.

The game had a wonderful subtext too, with Steve Bruce calling into question player loyalty after Asamoah Gyan’s bizarre about-turn led to him joining a UAE side on loan. Last  January, Bruce had similar sentiments for Darren Bent. While Gyan’s behaviour is crass and only about money (well, that and living in Sunderland where it only gets light in June), Bruce might want to ask Wigan fans (twice) and Palace fans what they think on the subject. Pot, kettle anyone?

Arsenal recorded their first win of the league campaign, but it took a freaky bit of luck for the Gunners to beat Swansea. Quite how Michel Vorm thought it was possible to throw a ball through a player to someone beyond them, remains to be seen. Andrey Arshavin didn’t wait around to find out, and took the gift with aplomb.

Stoke’s wonderful start to the season continued with a 1-0 win over Liverpool. Tony Pulis’ side should start to get more than the grudging and patronising respect they are given; they are excelling in what is regularly touted as the best league in the world. That’s not down to luck, however unattractive on the eye they may be to some pundits. 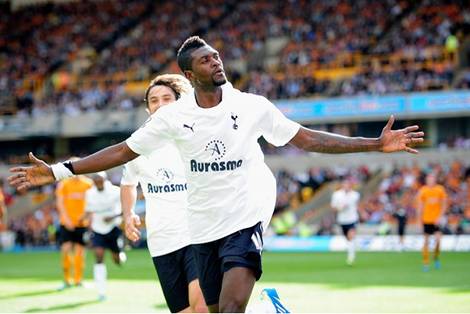 “Who do you play for again, Ade?” The Togo striker is confused as the rest of us, but still knows where the net is!
Harry Redknapp’s season finally got going as Spurs dented Wolves’ early season confidence with Emmanuel Adebayor scoring on his debut. That tends to help any player crossing a divide and joining a team whose fans once hurled abuse at him. Jermain Defoe added a second and Spurs’ new strikeforce is up and running.

Elsewhere in Europe, some of the bigger clubs found things a little hairy early in the season, as Inter Milan lost a tightly-fought contest with Palmero and Barcelona drew 2-2 with Real Sociedad.

Written By
Ramsay
More from Ramsay
Lewandowski gets a unique Hypervenom II design in celebration of his 100...
Read More