Events at White Hart Lane on Saturday evening meant all that preceded and followed on football pitches this weekend were something of an irrelevance. 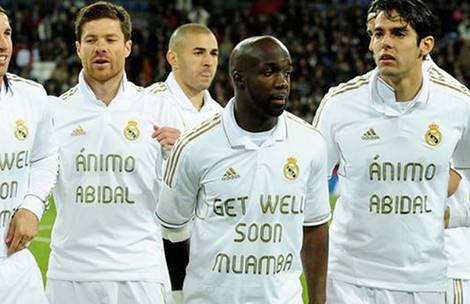 For all the money that floats around football in this country, sad moments such as Fabrice Muamba’s sudden collapse and his subsequent fight for his life remind everyone that football is about human beings first and foremost.

The gestures of support extended well beyond these shores, with Real Madrid’s superstars wearing t-shirts bearing messages ahead of their game against Malaga last night. We all wish him well.

In the FA Cup’s three other ties, Everton and Sunderland served up an entertaining game that ended all square, but the incentive for David Moyes’ side to win their replay could be no greater following the draw for the semi-finals. Should they prevail, a Merseyside derby awaits to evoke memories of the 1980s when both sides regularly contested the nation’s silverware.

Ah. There they are. Fernando Torres rediscovers his shooting boots. Literally.

That’s because Liverpool overcame strong resistance from Stoke to win their quarter-final 2-1. Luis Suarez and Stewart Downing goals either side of a Peter Crouch equaliser were enough for Kenny Dalglish’s men to head to Wembley for a second time this season. It’s sad that you don’t have to actually reach the FA Cup Final to get to Wembley these days, but the Reds won’t care a jot.

Fernando Torres remembered he is a footballer to help Chelsea brush aside the challenge from Championship Leicester. The Spaniard’s brace ended a run of 24 games without a goal and ensured that Roberto di Matteo’s role as caretaker continues to reap rewards.

A caretaker manager/interim manager enjoying less success is Wolves’ Terry Connor. Their second 5-0 spanking of his four-game tenure will have a huge impact at both ends of the table. For Manchester United, it almost wipes out their inferior goal difference to leave them in the driving seat in the race for the title.

For Wolves it means that, barring a miraculous upturn in form, they are a ship sinking without trace.

Wigan wasted the opportunity to gain a vital win, battering West Brom into submission only to end up sharing the points in a 1-1 draw. Clichés abound at this time of the season, but playing well and not winning counts for very little when the final table appears in May.

In a game which probably counted for very little, Fulham against Swansea was nonetheless hugely entertaining. Swansea’s commitment to passing the football was highlighted in a sequence of just less than two minutes in which they refused to panic or give the ball away cheaply.

Brendan Rodgers’ side ran out 3-0 winners and in the process continued to back the assertion that you don’t have to be multimillionaires to play the game properly.

All eyes will be on Manchester City this week as they aim to close the gap on Manchester United by defeating a resurgent Chelsea. Whilst facing the Blues might have been a welcome prospect all of 3 weeks ago, all of a sudden, the pendulum once again looks to have swung in Manchester United’s favour.

Written By
Kyle Elliot
More from Kyle Elliot
adidas deck out their newly-updated Nitrocharge with an alternative launch colourway for...
Read More