A fairly low-key weekend of football culminated in an absolute cracker of a match – Sky are prone to going overboard about the games they screen, but for once they were spot on. David Silva’s solitary goal proved decisive, but the display of passing and the assured touch of nearly every player on display was a reminder of just how good ‘English’ football can be. 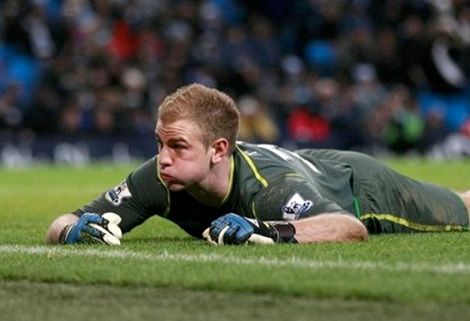 Joe Hart accurately sums up how everyone in the World felt after Arsenal v City!

The win returned City to the summit they had temporarily surrendered earlier in the day when Manchester United capitalised on some generous Joey Barton gifts to breeze past QPR at Loftus Road. In all the euphoria about City’s progress domestically this season, their city rivals sit just two points behind them in spite of being fairly ordinary at times.

Spurs returned to winning ways with first-half substitute Roman Pavlyuchenko’s goal enough to see off Sunderland. The Russian always seems to score when he plays but he never really plays – though Spurs haven’t exactly struggled without him.

Liverpool brushed aside a woeful Aston Villa at Villa Park; the home side looked disinterested throughout and only the post and crossbar kept the score down. The worst thing about Liverpool’s performance was their strip. Forget your homage to some long lost kit from the past – that white/blue/black monstrosity is horrendous. 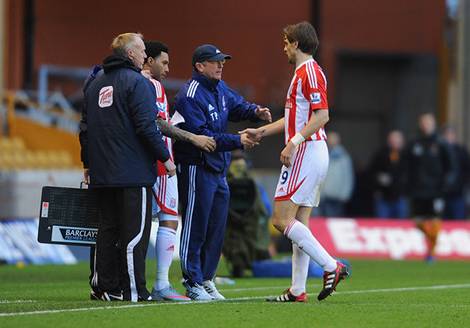 On Saturday, Stoke capitalised on some generous refereeing when an already booked Jonathan Woodgate gave away a penalty but stayed on the pitch (to be substituted minutes later). Although Stephen Hunt converted the spot kick, the Potters came from behind to grab all three points. In all this, why on earth is Woodgate playing at right back? If he is fit enough to play he is comfortably one of the best central defenders in the country. Why waste those rare moments when he is fit by playing him out of position?

Steve Kean can look forward to another contract extension after Blackburn’s latest defeat left them firmly in the drop zone. Never managed a football club before? Shown little aptitude for the job in the year you’ve had it? Come to Blackburn! West Brom’s last-gasp win helped to move them towards the middle of the table.

Lancashire’s woes continued, with Owen Coyle’s Bolton losing 2-0 at Fulham, for whom Brian Ruiz scored a stunning scooped goal to seal the win. Wigan did at least earn a point against Chelsea, but these are dark times in that part of the world.

Norwich’s impressive start to life in the top flight shows no signs of faltering. Although Everton rescued a point at Goodison, the Canaries prove that even average players can be moulded into effective teams who can hold their own. Nobody thought Grant Holt was a Premiership footballer, but with seven league goals already to his name he’ll be happy to keep proving the critics wrong. 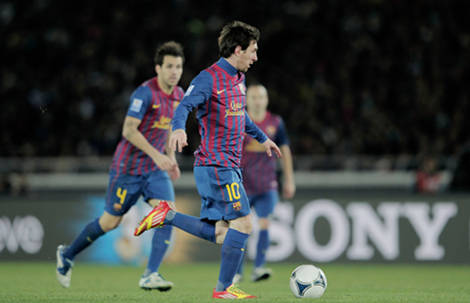 Messi centre-stage, the opposition nowhere in sight. Sums up the final.

Across the far side of the globe, Barcelona took on Santos of Brazil in what was billed as the battle of the entertainers; Messi vs. Neymar.

A say ‘took on’, what I actually mean is ‘took apart’. The Catalonia Club could hardly have looked more comfortable as they deconstructed the Copa Libertadores holders comprehensively with four goals to nil, to claim the title as ‘Best Club in the World. As if we needed reminding.

Whilst the gulf in class between the clubs in UEFA and just about every other footballing federation in the world is something that clearly should be a concern to the powers at FIFA, what I’d be more worried about is the lack of visibility this tournament seems to have suffered

I spoke to two youngsters – one wearing a Barca shirt with Messi printed on the back – and when I asked if they’d watched Leo & co. in the final of the FIFA Club World Cup, they had no idea the whole thing had taken place. And FIFA wonder why teams seem to avoid taking the tournament seriously.

Written By
Kyle Elliot
More from Kyle Elliot
The adidas Predator is Back in Black! This time, it's the adiPower...
Read More