What glorious weekend for football! Two games at Wembley, Premier League action and the first of four El Clasicos! Starting the round-up; The Manchester Derby at Wembley… 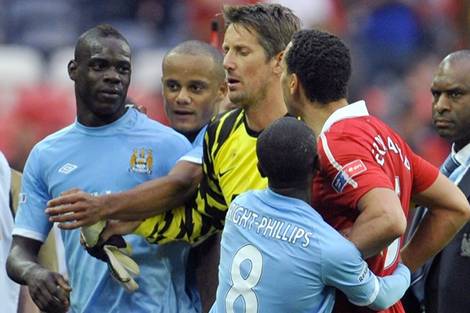 Tempers flare at Wembley, whilst Vincent Kompany lurks unnervingly in the background…

When Gary Neville prances down the touchline celebrating madly in front of rival supporters, he˘ a passionate player showing true emotions; when Mario Balotelli does it, he is a loon who needs sedating. Separately, was Balotelli˘ ‹Ĺ›crime˘€žË more newsworthy than Paul Scholes˘€žË latest dreadful tackle? Double standards are at work.

Manchester City will say that Champions League qualification is what really matters this season, but the prospect of winning the FA Cup would be a welcome sideshow to their extravagant plans. Standing in their way are Stoke, who made Bolton wish they˘€žËd gone out in the quarter-finals.

Wembley is a long way from Bolton when your team doesn˘€žËt turn up Ĺ› Gary Cahill˘ observation that it˘ hard to win when you˘€žËre carrying half the team was painfully true. Stoke will be no pushover for Roberto Mancini˘ men Ĺ› either way, it will be nice to have a name on the honours˘€žË list that hasn˘€žËt appeared there for a while. 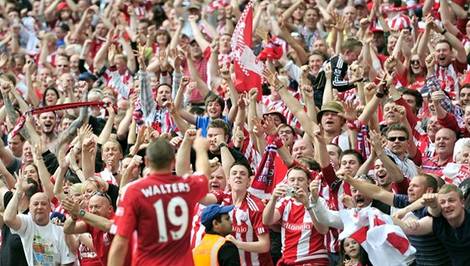 Jon Walters shows how celebrating to the right set of fans can be equally as gratifying as annoying the wrong set. Balotelli take note.

During all that, Arsenal and Liverpool were busy trialling a new format for the modern game Ĺ› the 102-minute match. It worked a treat, with penalties in the 98th and final minute leading to a 1-1 draw. Oddly enough, Arsene Wenger was less appreciative of the new concept.

On Saturday, Wigan won at Blackpool to jump out of the bottom three and dump their hosts there for the first time this season. The way Ian Holloway˘ side is falling to pieces, the new surroundings are ones they˘€žËll grow accustomed to.

West Brom˘ impressive unbeaten run under Roy Hodgson came to an end as Chelsea remembered how to score. Fernando Torres also found the back of the net but, predictably, it didn˘€žËt count. He and his Spain colleague David Villa are sharing something of a barren run that flies in the face of the talents we know they both possess.

In a pulsating if not fantastic Clasico, Barcelona˘ Villa looked nervous in front of goal, so it was probably for the best that Raul Albiol hauled him down when he looked like pulling the trigger Ĺ› he˘€žËd have probably missed anyway. Which is something Lionel Messi didn˘€žËt do from the resulting spot kick. 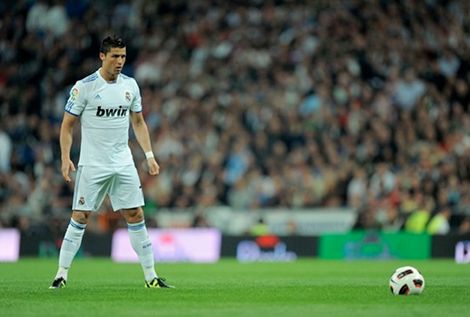 Real Madrid Ĺ› as Jose Mourinho (Or ‘Mystic Mo’ as he now likes to be called) had predicted they would be before the match Ĺ› were down to 10 men and Barca proceeded to put on a training session exercise before the hosts actually started to play and were rewarded with a soft penalty in a collision of two cheats.

Dani Alves and Marcelo are wonderful footballing talents going forward, but they are both guilty of some hideous play-acting on a regular basis. The only surprise when the penalty was awarded was that Alves didn˘€žËt go down as if the official had shot him as he gestured to the spot.

Cristiano Ronaldo confidently tucked away his penalty in his spangly new Nike CR Safari football boots, securing his first club goal against Lionel Messi and preventing a Nike exec from having a heart attack, somewhere.

Attention now moves to Wednesday night and round two of the battle between Spain˘ giants, but this time the winners will have a more instant gratification; the chance to lift the Copa Del Rey over their hated opponents.