It’s time for a belated Weekend Review here on Footy-Boots.com – thanks to Nike’s selfish timing of the release of the new CTR 360 II – but it does mean that we got to include all the week’s action, including Liverpool’s triumph over Aston Villa!

While Manchester United˘ players were putting their feet up instead of taking in the delights of Blackpool in winter, Chelsea once again maintained their admirable quest to garner as few goals as possible from league fixtures. Following their Alastair Cook-like scores of the early season, they have now managed just three goals in their last six league games. And even Jermaine Beckford can score against them, so things must be bad.

Carlos Tevez scored the winner as Manchester City˘ players took time out from smacking each other to beat Bolton. Tevez then decided that the bloke in the suit and scarf was bang out of order for substituting him, remonstrating with him and then anyone on the City bench who would listen. Just how seriously are you supposed to take Taz in a snood?

Spurs once again flattered to deceive, starting brightly and taking the lead through Sebastien Bassong at St. Andrew˘ before succumbing to Craig Gardner˘ perfectly-timed run and header late on. Birmingham fans celebrated by not charging police horses, ripping up their plastic seats or throwing fireworks. Which was nice of them.

Wigan and Stoke shared four goals evenly – with a Stoke player managing to get the last touch on every single one Ĺ› while Sam Allardyce˘ Blackburn sent Wolves to the bottom of the table with a 3-0 win at Ewood Park.

Clearly riled at losing bottom place, Avram Grant˘ troops restored order on Sunday at Sunderland, going down to Jordan Henderson˘ first-half strike to regain their spiritual position at the foot of the Premiership.

Last night saw Gerrard Houllier return to Anfield – we heard that after the game, he and Roy Hodgson shared a glass of wine and compared notes on how you (don˘€žËt) meet the demands of a fanbase that believes it has a divine right to success in the league, even when the club˘ last title-winning captain is now 55 and Blackburn Rovers and Leeds United before them have won the league more recently. 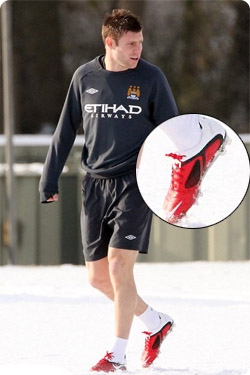 And whilst adidas have been releasing black-out football boots like no-one’s business at the moment, it was refreshing to see that Nike took a typically more American approach by letting stars like James Milner wear the new CTR 360 II in glorious techni-colour training with Manchester City last week!

Written By
Kyle Elliot
More from Kyle Elliot
adidas deliver the new adiPure 11pro in a colourway fitting of it's...
Read More