Simon Skirrow of Nomis has revealed that one of his strategies of keeping his company profitable against the bigger boys in the boot market is to avoid sponsoring Premier League superstars, and instead to look to amateur and grass-roots players for free endorsements and development. But is this an effective strategy? I decided to look into the figures that have got the bigger companies where they are and see if it’s a worthwhile trade off.

Footy-boots recently revealed that, on a typical retainer for an England international, l could look to earn around £100,000 a year on a boot contract. Obviously some will be more and others significantly less, but given flagship players like Beckham and Owen will earn much, much more it seems like a good average to work with.

So for a full squad of players there’s potentially over £2 million in sponsorship deals. Meaning that this squad is hopefully going to influence 26,250 people to go out and buy new boots (at an average of £80 a pair) like their heroes, with each hero hopefully selling 1,250 pairs of cleats around the world.

Given that each new incarnation of a boot like the Total 90 Laser II or Predator range is usually revamped in time for a major tournament, using Euro 2008 as an example, a company like Nike or Adidas could be spending up to around £2 million in sponsorship for any one of the popular squads (obviously much less for the ‘minnow’ countries) to try and get the rest of the country into some new boots. So an educated guess might place their player sponsorship total at around £25 million for a continental tournament that is shown around the world. And so a question – could the sales of something as humble as a pair of footy boots possibly match such a huge total?

On the other hand, for a company like Nomis – who offers no professional sponsorship contracts – this is not a massive amount of money to spend, it’s a massive amount to save! Whilst it probably wouldn’t offer such lucrative deals or indeed have that money to invest in player contracts in the first place, it can afford to sell 312,500 less boots than a massive manufacturer whilst, based on the theory that they have somewhat similar production costs per unit, and still remain a profitable operation.

So, on paper, Nomis look to have a great strategy – don’t gamble massive sums on players having a huge influence over the boot-buying public, instead invest that money into keeping your bottom line solid and continue investing in product innovation. It’s a fantastic strategy that has sensibility at it’s core and helps guarantee that smaller boot companies will still continue to give us writers and fans something to report on and chat about, even in the current climate.

So what about the big companies? Have Nike and Adidas been wasting their money? Could they have invested those huge amounts of cash into paying a designer to develop a Mercurial Vapour V, instead of just painting a stripe on the IV’s? 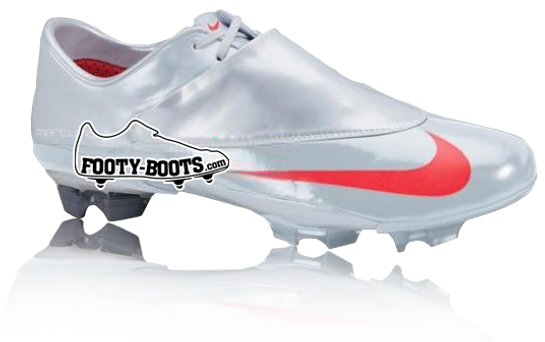 A look at Adidas’ sales figures for the 3 months after Euro 2008 – available in their quarterly reports – showed that the sportswear giant’s ‘Sport Performance’ division’s (boots, running shoes, basketball trainers) year to date revenues were an astronomical 4.813 billion with football being the category claiming the majority of the growth.

Taking the term ‘majority’ at it’s loosest definition, this must mean the revenue generated from football products was over 2 billion. With boots being the most expensive item in most sportswear ranges, it’s fair to assume that they’re probably a big factor in that sum – but even if they were only responsible for a quarter of that remaining profit – the ‘humble footy boot’ still returned £250 million for the estimated £25m invested, and based on the average price per pair of boots – over 3 million pairs of boots sold.

Could this massive figure (that could fit 1 in every 5 human beings in the British Isles in a pair of boots) be pinned down to the hero-worship for players like Villa, Podolski and Robben? It certainly couldn’t hurt…

It’s definitely a massive call to make for any boot company – do you take a method that is guaranteed to save your business money or do you gamble on getting your name onto players feet, and ultimately, into the buying publics heads?

Leave your comments below with what you think is the best way for any company to sell boots.

Does it depend on the specialist nature of the boots?

Is it ultimately down to the way the company is run?

I know many of our regular readers were very vocal on Mr. Skirrow’s take on the debate in his interview and I’d love to hear back from anyone that reads the article! As already mentioned, please do use the comments section.

Slight disclaimer: A lot of the figures in my article are pieced together from the sparse bits of information available online to armchair journos like myself and are merely a tool to help anyone that reads the article get a better understanding, and most importantly, some enjoyment out of the economics of footy boots.

Written By
Felipe
More from Felipe
Ex Gunner is in line for an unexpected Arsenal homecoming.
Read More